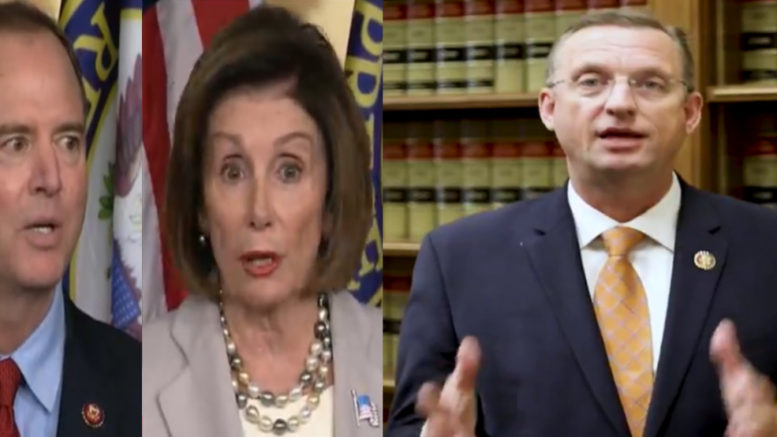 Collins argued that “impeachment” should be a fair process, not behind closed doors, and that in a true impeachment inquiry, both sides of the party have the same powers to call witnesses and use subpoena power.

In his first video, Rep. Collins pointed out that Democrats claimed, “Republicans have the same subpoena power as Democrats had during Clinton’s impeachment.”

However, Collins explained why that is not true. “All that is happening right now is Adam Schiff and others on the majority side, with the blessing of Speaker Pelosi, is issuing subpoenas as they want,” he said. “The minority has no power to issue subpoenas under the current rules because we’re not actually in an inquiry. What happened during the Clinton investigation, when subpoena power is issued, it was issued jointly. Then, both the majority and the minority had the power to call witnesses. …Let’s be very honest here, that is a myth to say that the Republicans today have the same powers that we have for subpoena in the 105th Congress. When you look at the honest truth, that myth is busted.

In his second video, Rep. Collins pointed out that Democrats claimed, “[They] don’t need to hold a House vote to authorize a legitimate impeachment inquiry before voting to impeach the President”, meaning House Speaker Nancy Pelosi (D-CA) can “impeach the President anyway she likes.”

The Georgia Congressman described why that’s a problem: “The House itself, by our Constitution, controls impeachment. The House has the power to start impeachment and the way we’ve always done that is we’ve started in a system of fairness. So, the House as a whole has always voted to start an inquiry. An inquiry may or may not lead to articles of impeachment. We’re seemingly getting the two conflated. Articles of impeachment are what the official charges brought by the House against a President … in our issues on how we deal with impeachment. In this case, Donald Trump. And those are what we would vote on to send to the Senate for an actual trial.” (Continued Below)

“Should Speaker Pelosi bring this to a vote?” Collins asked. “Yes. The reason she should is because of fairness. … Instead of ripping the shreds of the House precedent, ripping the core of the fairness of what has happened over the years, when the House has saw fit to begin an impeachment inquiry of a sitting President. It demands it, history demands it. Do they have to have this impeachment inquiry to make it legitimate? Yes. The myth is that you can do it without it.”

In his third video, the House Judiciary Ranking Member debunked House Intel Chairman Adam Schiff’s (D-CA) claim where he said, “An impeachment inquiry can operate in secret,” acting like a “grand jury.”

Rep. Collins said, “Proceedings are different in this case because [Richard] Nixon and [Bill] Clinton’s impeachments were based on evidence produced by grand jury investigations. There’s been some who say the House operates as a grand jury. They tried to highjack the system and use legal terms from our criminal justice system to say what we’re doing. But in all fairness to those saying this is true, that is not what the House has done before.” (Continued Below)

Collins continued, “In fact, precedent says to take a gravity situation, such as an impeachment of a President, and make that into something that is in the criminal justice system is just wrong. … If we come to the precipice of impeaching a President and overturning the vote of the American people, it needs to be done at all phases where everyone understands what’s going on in both sides of Representatives.”

He noted that this is something that does not need to be done in secret. “You do not overturn the will of the people in a secret environment when it comes to the House of Representatives. This is a big distinction that Democrats are trying to hide behind. … The President is elected by the public. The President campaigns in public, … has to work to represent our country and world in public. Grand jury proceedings are for criminal courts. Impeachment inquiries as the Hosue has defined the over the years, is for hearings in the public eye under fair and scrutiny of all that are part. Again, myth busted,” Collins said.

In his fourth myth-busting video, Collins describes how Democrats say they “aren’t impeaching President Donald Trump because of politics”, but he argued otherwise as they first introduced articles of impeachment in 2017.

“Democrats are motivated by the love of the Constitution and a process, not politics. This is all about the Ukraine they tell us,” Collins said. “This is not about a phone call with Ukraine, it’s about a Democratic majority whose dislike and hatred for this President has boiled over since the minute he was elected.” (Videos Below)

“It’s not America to simply want to impeach somebody that you don’t like,” Rep. Collins expressed. “An impeachment inquiry is a serious step for a serious body. … When it comes to overturning the will of the people, it is something we must take seriously. The way you get by in this country is if you lose, you go out and run a better campaign, [or] put a better candidate up. We don’t use impeachment as a political tool. Our country deserves better, and this institution definitely deserves better.

Myth: Republicans have the same subpoena power now as Democrats had during Clinton’s impeachment.
Fact: Republicans can’t subpoena witnesses or documents. They can’t even force a committee vote on subpoenas.#MythBustingMonday pic.twitter.com/otG9ZetJPP

Myth: Democrats don’t need to hold a House vote to authorize a legitimate impeachment inquiry before voting to impeach the president.

Fact: Nullifying a national election is so severe the House has always voted to authorize a presidential impeachment inquiry.#MythBustingMonday pic.twitter.com/M9a2Xq8Itq

Myth: An impeachment inquiry should operate in secret.

Fact: The House has always given the president’s lawyers the opportunity to defend him in public hearings during impeachment proceedings.#MythBustingMonday pic.twitter.com/hODKCa1atq

Myth: Democrats aren’t impeaching @RealDonaldTrump because of politics. This is about Ukraine.