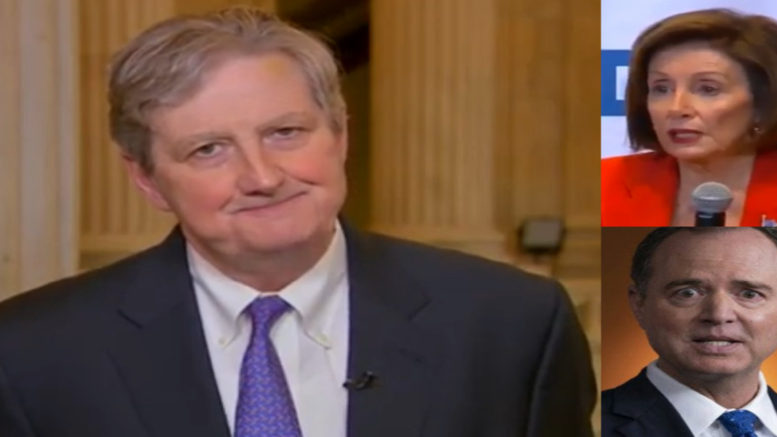 House Democrats on Tuesday, released the text of their impeachment resolution, ahead of Thursday’s House vote, in their continued effort to impeach President Donald J. Trump.

“I think they’re just playing games. The new resolution, I interpret it– well, I’m not sure what to make of it, except that ‘I liken it to trying to paint on rotten wood,'” Sen. Kennedy expressed.

“Now, no fair-minded person with an intellect above a single cell organism believes that from the very beginning, these impeachment proceedings have been anything but ‘rigged’. I mean, does anybody really believe that Speaker Pelosi is impartial?” he asked. “Or Chairman Schiff? Their judicial velocity is clearly guilty.”

He noted that there is no rule of law or due process. “Now after a number of people, not just Republicans, American people said, ‘Hey, wait a minute!’ Whether you like President Trump or not, I thought we had due process and the rule of law in this country,” Sen. Kennedy said.

Kennedy pointed out that in the Democrats’ resolution, Republicans will have the opportunity to call witnesses. However, Republicans have to get Adam Schiff’s permission for each witness. “Now Adam Schiff’s not calling the shots,” he said. “Nancy Pelosi is. If you took Speaker Pelosi and turned her upside down and shook her, Adam Schiff would fall out of her pocket. Bam! Hit the floor! Okay, she’s calling these shots.” (Continued Below)

Sen. Kennedy also believes that there is something going on behind the scenes to help former Vice President Joe Biden.

“Do you think that’s a coincidence?” the Louisianna Senator asked after host Neil Cavuto suggested that the House may send the impeachment vote over to the Senate into the beginning of next year, which would imperil the six Democratic Senators who are running for president.

“I don’t think it’s a coincidence. We were originally told that the impeachment articles would be sent to us by Thanksgiving, so I’m figuring we’ll be here over Christmas doing our part in the Senate. Now, all of sudden, they’ve been delayed until January. Maybe it’s a coincidence, but I don’t believe in coincidences. Who does that help? … [Biden]. I’m not accusing anybody of anything, I’m just saying, it’s been my experience up here, there [are] very few coincidences,” he said. (Video Below)

Senator Kennedy added, “And I know with the Iowa caucuses starting in February, you’re going to have Senators Warren, … Sanders, … Klobuchar, … Booker, let me go down the list. All of them are gonna be in the Senate, six days a week— most of the day, Monday through Saturday. You don’t have to be mensa material to figure out who that helps.”