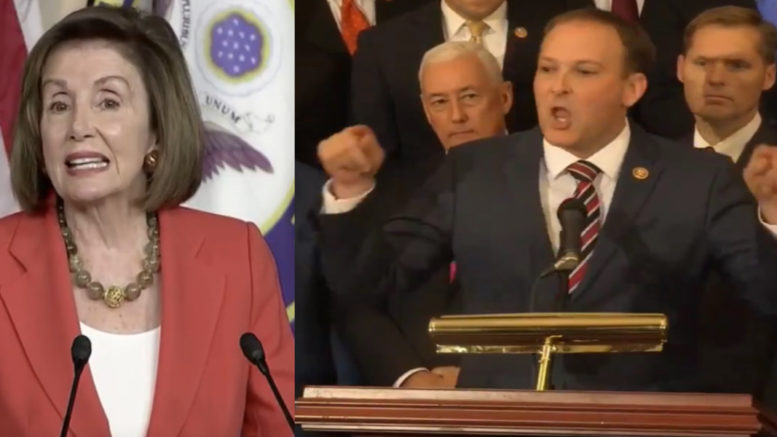 Congressman Lee Zeldin (R-NY), a member of the Foreign Affairs Committee, stood with his Republican colleagues after the Democrats’ impeachment resolution passed and blasted Rep. Adam Schiff during a press conference Thursday where he demanded the House Intel Chairman immediately release the transcripts of the depositions that were held behind-closed-doors.

Rep. Zeldin also believes that House Speaker Nancy Pelosi (D-CA) and members of her party are going to lose the next election for “all of the right reasons” because members in the isle were “begged not to cheer or clap”. He then wondered of impeachment: “The eagerness, the happiness, that Democrats have and their enraged, liberal activist base at home has– to rip the country in half?”

Instead of focusing on legislation and passing bills for the American people, Zeldin said: “Colleagues have gavels, who are eagerly ripping our country in half.”

Then, the New York Congressman pointed out that House Intel Chairman, Adam Schiff, is the prosecutor, the judge, the jury, the chief strategist for lying and leaking, and a “new territory called witness coaching”, adding that “he wasn’t very good at it.” (Continued Below)

“And it’s not just getting close to the whistleblower. Get this: jurisdiction of the Intelligence Committee is to look into intelligence related matters. But Adam Schiff decided two days ago, in his most recent rule change, that in no way, shape, or form can you ask any question that has to do with the Intelligence Community,” Rep. Zeldin explained.

Next, he pointed to the press and declared, “Now you all are being used. Some of you are happy about it, some of you are not. But many of you are reporting zero percent of the story. There was one story that came out yesterday in Politico that was filled with falsehoods, just somebody who lied to you. I watched CNN last night and I saw a host, one allegation after another say stuff that just was not true. Your sources, those Dems in that bunker, are trying to create a narrative because Adam Schiff aspires to write the world’s greatest parody,” the New York Congressman expressed. [Emphasized].

“Two floors below us, Adam Schiff’s ‘bunker’ in the Capitol basement– Adam Schiff is tearing up his parody. He’s going to have to rewrite it. Why is that?” Rep. Zeldin asked. “They say we can’t talk about the substance, but isn’t it kind of curious that you don’t know what’s going on today? … Why is that?” (Continued Below)

Rep. Zeldin noted Ukraine didn’t know the aid was held up and they didn’t say anything to the United States until just before it was released. “And then, it was released. Guess what Ukraine had to do in order to get the aid released? Nothing.” he announced.

“Now Adam Schiff needs to release all the transcripts right now!” Rep. Zeldin demanded as his Republican colleagues applauded him. “On behalf of our constituents, on behalf of the American public– for everyone who’s pissed about being misled by Adam Schiff and his cohorts, hiding in the bunker of Capitol basement, using you to lie to our constituents! Release the darn transcripts!” [Emphasized]

“And the President of the United States is right to be concerned about a corrupt foreign company, run by a corrupt Ukranian Oligarch– hiring the son of a Vice President with no energy experience, no Ukraine experience, for at least 50 thousand dollars a month. … [Biden] threatens the loss of one million dollars if they don’t immediately fire the prosecutor,” Zeldin said, noting the former vice president threatened to withhold $1 billion in critical U.S. aid if Viktor Shokin was not fired. (Video Below)

Zeldin also believes Joe Biden shouldn’t be held from scrutiny because he’s running for president. “And if that’s not illegal, it should be illegal! And never again,” he suggested.

“So on the substance Adam, I say bring it on. Release the darn transcripts and do it today!” Rep. Zeldin demanded as he slammed down his finger on the podium. [Emphasized].

My comments today after voting NO on the impeachment inquiry resolution: pic.twitter.com/5uUNPTuEXx

Ukraine didn’t even know there was a hold on aid until shortly before it was released.

Do you know what Ukraine then had to do in order to get the hold released?

Just voted NO on the impeachment inquiry resolution.

Nancy Pelosi just got her wish for a bipartisan vote on her impeachment inquiry. The problem is that the bipartisan vote was AGAINST her resolution and this disgusting side show to rip our country in half, which is being fueled solely with blind enraged hate.

(Related: Amid His Whistleblower Involvement, Rep. Collins Demands Schiff Be The ‘First Witness’ To Testify Before Judiciary Cmte)