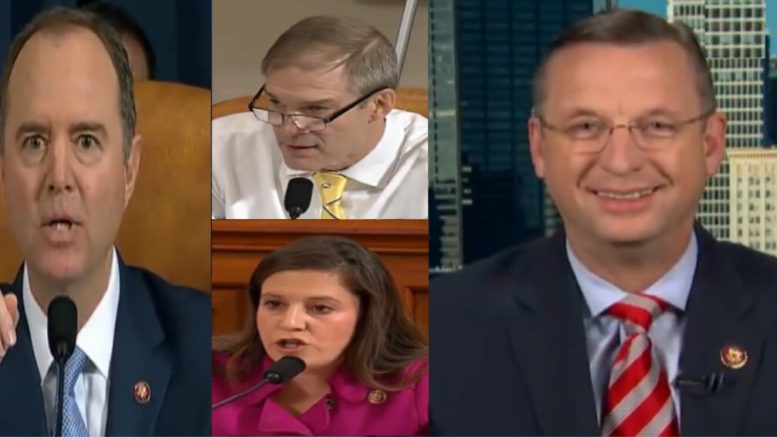 Ranking member of the House Judiciary Committee, Doug Collins (R-GA), spoke with host Maria Bartiromo on Fox News’ “Sunday Morning Futures” where he weighed in on the first week of the Democratic-led House impeachment inquiry hearings.

Collins believes House Intelligence Committee Chairman, Adam Schiff (D-CA), is a “runaway chairman, who has no idea know what he is doing when it comes to carrying out a fair and honest procedure.”

Asked what his biggest takeaway was from the week pertaining to the hearings, Rep. Doug Collins replied, “We’re through another week and nothing has changed about the simple fact that the President did nothing wrong. There was nothing in the transcript, no pressure from the side from the Ukranian Prime Minister, who said he wasn’t pressured. We saw no holding up of money, that they even didn’t know it was being held up and they got the money.”

“But what we did see this week: there was something debunked. Adam Schiff again, credibility– completely debunked. We saw arguments from the Democrats such as, ‘hearsay is really good evidence. It’s really sometimes the best evidence,'” Collins said, referring to claims made by Rep. Mike Quigley (D-IL).

“And then, of course, the wonderful one from Mr. Swalwell, who said that ‘if you remove an ambassador from their post because they disagree with you, that was an impeachable offense’, or implying an impeachable offense,” the Georgia Congressman continued. Rep. Eric Swalwell (D-CA) told host John Berman during an interview on CNN’s “New Day”, that it’s an “abuse of power” for the President to remove an ambassador “for political reasons”.

“What we saw last week was a completely unhinged response from the Democrats to a President that they have hated. We saw them actually controlling the narrative [in] such a way because they know they’re not winning, so they have to be able to put out what they want,” he said. (Continued Below)

“I saw a chairman and the rules that we passed a week or so ago confirmed one thing, just as we saw in our Judiciary Committee when they didn’t have anything else. They wanted to do what I call ‘bring a donor to work day’– where they actually let one of their counsels, who’s a big donor to the Democratic Party, ask questions to Corey Lewandowski,” Collins continued.

“This is simply another process where they want staff members to ask, like Mr. Goldman last week, instead of members of Congress, like Elise Stefanik and other people. These are the rules they set up because they want the narrative to be so tailored and so constructed to their one argument that they don’t care. They hate this President so much they do not care about process and rules,” the Georgia Congressman explained. “But the worst part is, they don’t care about the substance. They know they have nothing, so now, they’re making it up and polling to figure out what is best to sell to the American people.”

The House Judiciary ranking member then described why Schiff has no idea know what he is doing when it comes to carrying out a fair and honest procedure, and why the transcripts need to be released. (Continued Below)

“Two things: I think number one, the transcripts are just so simply you can add to the narrative. I mean, yesterday late, they finally released Mr. Morrison’s transcript, which could be used and frankly, following up on [William] Taylor’s testimony, that we’ve heard in transcripts released. … He said that he was actually on the call, there was nothing improper– that he incorporated any input that Mr. Vindman had into this. So there [are] some things that needed to be able to ask questions,” Rep. Collins explained.

“And to say that a member is not recognized, simply says ‘this is a train, we’re on the tracks. I’m sorry Republicans, you’re trying to lay on the tracks, even if it’s proper. I’m not gonna have it because I only have one purpose in mind– is to impeach this President and you’re not gonna get in my way. I don’t care what the rules say,'” he added. (Video Below)

“That’s an important part that most people need to find. Most people may gloss over that, but at the end of the day, when the Senate looks at this and the American people look at it, they see a ‘runaway chairman’, who has no idea what he’s doing when it comes to actually carrying out a fair honest procedure,” Rep. Doug Collins concluded.