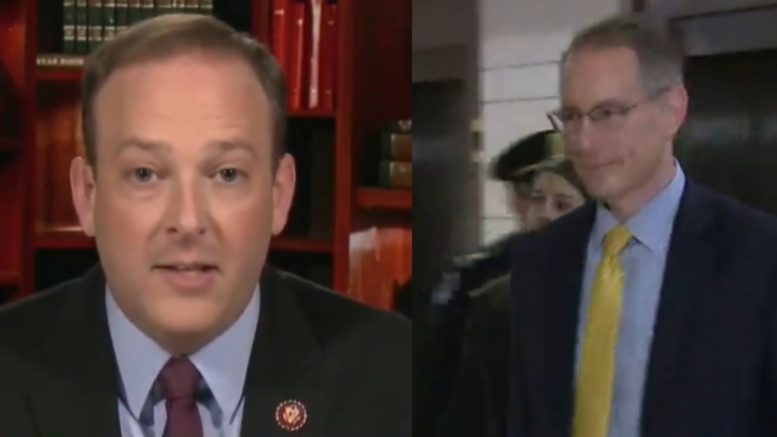 According to CBS News, Sandy is the first official from the Office of Management and Budget (OMB) to testify in the inquiry and his testimony could have helped answer any remaining questions in regards to the withholding of military aid to Ukraine for several months, which the the OMB likely played a major role in the move.

Zeldin said one of the main questions that committee members have been wondering is “Why there was a hold in aid to Ukraine?” And Sandy’s answer to that question, according to Zeldin, “made for a very bad day for those who are pushing this impeachment charade.”

“So, there already was a hole in the facts. We already had that hole, but this is a deeper, bigger hole because this is Mark Sandy, who is not a political appointee,” he continued. “He is a career appointee who has been in the government for decades. His answer was candid, genuine, believable.” Video Below

Related Article: Ratcliffe Reveals Why Pelosi & Schiff Are “Racing” To Get Trump Impeached: “Before Information Comes Out [From] IG Report Or Durham”

Zeldin tweeted a segment of his interview with Bartiromo along with a caption that said, “The answers yesterday by OMB’s Mark Sandy, at the latest closed door impeachment depo, re the hold on $ to Ukraine, definitely didn’t fit Schiff’s fairy tale bribery narrative…not by a long shot.”

“This transcript & all other transcripts MUST be released BEFORE the next hearing,” he concluded. Video Below

The answers yesterday by OMB's Mark Sandy, at the latest closed door impeachment depo, re the hold on $ to Ukraine, definitely didn't fit Schiff's fairy tale bribery narrative…not by a long shot. This transcript & all other transcripts MUST be released BEFORE the next hearing. pic.twitter.com/iu5vnp6mxF