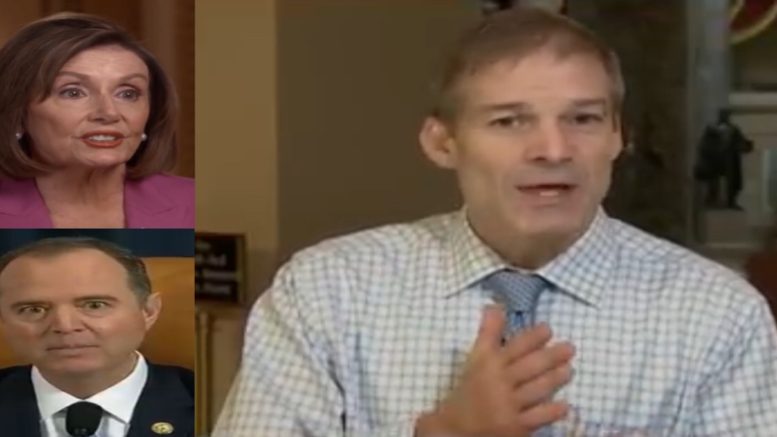 Congressman Jim Jordan (R-OH) spoke with host Dana Perino on Fox News’ “The Daily Briefing” where he weighed in ahead of Tuesday’s public Democrat-led impeachment inquiry hearing and listed “four facts that will never change” in the impeachment probe.

Jordan also noted that House Intelligence Chairman, Adam Schiff (D-CA), has not released all of the transcripts, calling it “tactical, strategic, planned, and choreographed ” on Schiff’s part.

Asked what he makes of the upcoming hearing from Gordon Sondland, United States Ambassador to the European Union, who will testify on Wednesday, Rep. Jordan said, “What we know is what he said in his deposition and that really did not change in the addendum he provided to his deposition testimony. [Sondland] said, ‘there was no quid pro quo and that Zelensky should do the right thing.’ And the right thing, of course, is deal with the huge corruption problem that has been part of Ukraine for the longest time.”

“Mr. Sondland was very clear when he gave his testimony to the committee in the deposition, and his addendum, fundamentally, didn’t really change that,” he added.

The Ohio Congressman listed “four facts that will never change” in Democrats’ impeachment inquiry, adding, “I don’t care how many witnesses they bring in, they can have eight hearings this week, the two big hearings with their three big witnesses last week. The facts have never changed.”

“We’ve got the transcript,” Rep. Jordan said. “There was no linkage of an investigation to security assistance money. We’ve got the two guys on the call: President Trump and [Ukranian] President Zelensky, who have both said, ‘There was no pressure, no pushing’. We have the fact that Ukraine didn’t know that the aid was held at the time of the call. And most importantly, President Zelensky didn’t announce, didn’t start, didn’t promise he was going to start any investigation to get the aid released.” (Continued Below)

“Adam Schiff gets to call witnesses whenever he wants. We had to give our list a week ago, Saturday. Adam Schiff hasn’t even released all of the transcripts and by now releasing the transcripts, we can’t use that testimony in these hearings,” Jordan explained.

Asked why Schiff is holding the transcripts, Jordan said, “It’s all tactical, it’s all strategic from their point of view. There’s a reason they scheduled the witnesses in the order they’ve scheduled them. There’s a reason they have the witnesses that we actually wanted called, even though they’re Adam Schiff’s witnesses– he deposed them. He called them for a deposition, they’re all in the afternoon. There’s a reason he doesn’t release all the transcripts until certain witnesses have already testified, [be]cause we actually follow the rules. They selectively leak from these depositions. I think it’s all planned, I think it’s choreographed and part of their unfair process to go after this President.” (Video Below)

The following transcripts have not been released yet: David Hale, undersecretary of state for political affairs; and Philip Reeker, a top State Department diplomat in charge of U.S. policy for Europe.

Ratcliffe explained that the first transcript will “tell you what the inspector general knew and didn’t know about the relationship between Chairman Schiff and the whistleblower, based on what Chairman Schiff did or didn’t reveal to the inspector general,” adding, “This is such an unfair process. I think everyone sees that Republicans are dealing with an inquiry where we have not just one, but two hands tied behind our back. But despite that, the Democrats are still losing.”

(Related: Schiff Interrupts Jordan & Says His “Indulgence Is Wearing Out”, Jordan Fires Back: “Our Indulgence Wore Out With You A Long Time Ago”)