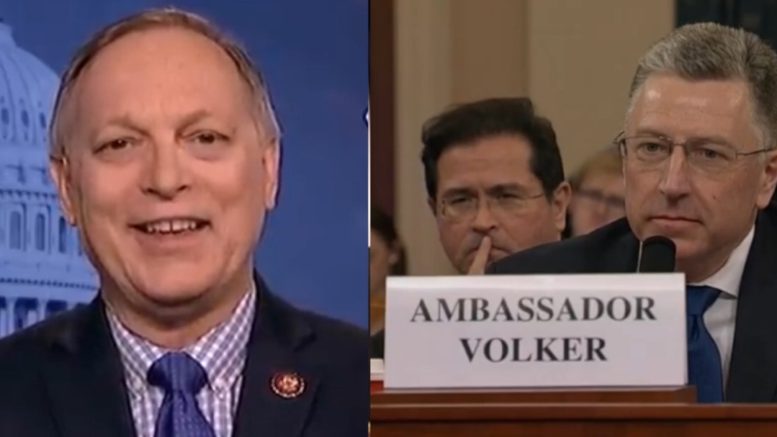 Rep. Andy Biggs (R-AZ) posted a clip on Twitter where he pointed out three key takeaways from Volker’s testimony that should “end the ballgame”.

Steve Castor asked Ambassador Volker, “You had a meeting with President Zelenksy on 26th?”

Volker responded, “Yes, we had a meeting the day after the phone call on the 26th, and the morning before heading out to the conflict zone.”

Castor then asked, “Were any of these concerning elements, that some witnesses have raised about the call, raised during the meeting with President Zelensky?”

Volker replied, “No, only the bare bones readout that I had received. That was also how it was discussed in the meeting with President Zelensky.” (Continued Below)

“So to the extent there’s been assertions President Zelensky was concerned about demands President Trump had made…” Castor began to ask, and Volker immediately said, “I don’t recall that. Let me turn that around. He was very positive about the phone call. I don’t recall him saying anything about demand, but he was very upbeat about the fact of the call.”

“And there was no discussion on the part of President Zelensky on how to navigate the various concerns that people have articulated about the call?” Castor asked, to which Volker replied, “I don’t remember that.”

“And Mr. Zeldin asked you in the deposition– that in no way, shape, or form in either readouts from the United States or Ukraine did you receive any indication, whatsoever for anything, that resembled a quid pro quo? Is that correct?” Castor asked, to which Volker said, “That’s correct.” (Video Below)

Castor noted the Democrats talking points of “quid pro quo”, “bribery” and “extortion”, to which Ambassador Volker said that he “was never involved in anything that he considered to be bribery or extortion.”

He doesn’t recall any concerns from Zelensky about call;

Zelensky was positive about call;

No indication of a quid pro quo, bribery, or extortion. That should be the ballgame. But Adam Schiff flails on.”

That should be the ballgame. But Adam Schiff flails on. pic.twitter.com/rzsnkH95HO

(Related: Rep Stewart Slams Vindman Over His Assertion That Trump’s Request Was A “Demand: “I Think It’s Nonsense”)