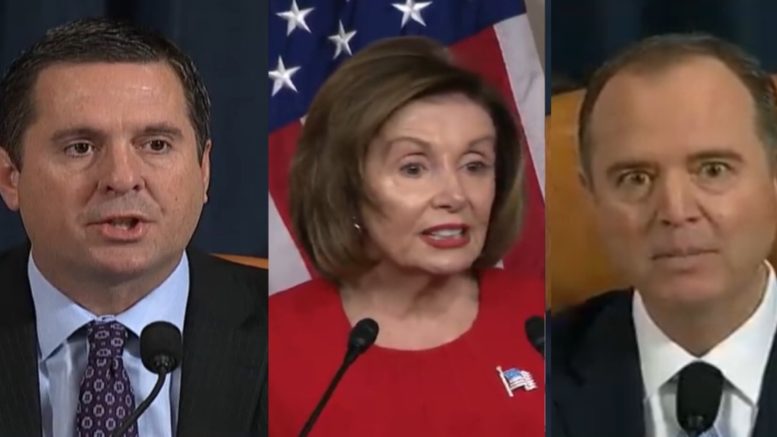 Rep. Devin Nunes (R-CA), the ranking member of the House Intelligence Committee, blasted Democrats and House Intelligence Committee Chairman, Adam Schiff (D-CA), saying they are the ones who “got caught”– in his opening statement, during a public hearing of ahead of testimony from Fiona Hill, the Trump administration’s former Russia adviser, and David Holmes, a top staffer at the U.S. Embassy in Ukraine.

The hearing public hearing Thursday is part of the Democratic-led impeachment inquiry against President Donald Trump, pertaining to his July 25 phone call with Ukranian President Zelenksy.

“Throughout these bizarre hearings, the Democrats have struggled to make the case that President Trump committed some impeachable offense on his phone call with Ukrainian President Zelensky. The offense itself changes depending on the day, ranging from a quid pro quo, to extortion, to bribery, to obstruction of justice, then back to quid pro quo,” Rep. Devin Nunes began in his opening.

The ranking member unveiled four reasons why Democrats have been forced onto a “carousel of accusations”:

“As numerous witnesses have testified, temporary holds on foreign aid occur fairly frequently for many different reasons. So how do we have an impeachable offense here when there’s no actual misdeed and no one even claiming to be a victim?” Rep. Nunes asked.

“The Democrats have tried to solve this dilemma with a simple slogan: ‘He got caught!’ President Trump, we are to believe, was just about to do something wrong, and getting caught was the only reason he backed down from whatever nefarious thought-crime the Democrats are accusing him of almost committing,” the California Congressman explained. (Continued Below)

“I once again urge Americans to consider the credibility of the Democrats on this committee who are now hurling these charges. For the last three years, it’s not President Trump who got caught, it’s the Democrats who ‘got caught,'” Rep. Nunes said as he proceeded to explain why.

“That is the Democrats’ pitiful legacy in recent years: They. Got. Caught,” Rep. Nunes declared.

He also noted: “Meanwhile, their supposed star witness testified that he was guessing that President Trump was tying Ukrainian aid to investigations despite no one telling him that was true, and the President himself explicitly telling him the opposite—that he wanted nothing from Ukraine.” (Video Below)

“Ladies and gentlemen, unless the Democrats once again scramble their kangaroo court rules, today’s hearing marks the merciful end of this spectacle in the Impeachment Committee, formerly known as the Intelligence Committee. Whether the Democrats reap the political benefit they want from this impeachment remains to be seen. But the damage they have done to this country will be long-lasting,” the ranking member continued.

“With this wrenching attempt to overthrow the President, they have pitted Americans against one another and poisoned the minds of fanatics who actually believe the entire galaxy of bizarre accusations they have leveled against the President since the day the American people elected him,” Rep. Nunes stated.

“I sincerely hope the Democrats end this affair as quickly as possible so our nation can begin to heal the many wounds it has inflicted on us. The people’s faith in government, and their belief that their vote counts for something, has been shaken,” he expressed. “From the Russia hoax to this shoddy Ukrainian sequel, the Democrats got caught. Let’s hope they finally learn a lesson, give their conspiracy theories a rest, and focus on governing for a change.”

He also submitted Republicans’ request to have a House Minority day of hearings. “To date, you have blocked key witnesses that we have requested from testifying in this partisan impeachment inquiry. This rule was not displaced by H Res. 660, and therefore, under House Rule 11-Clause 1A, it applies to the Democrats’ impeachment inquiry. We look forward to the chair promptly scheduling an agreed-upon time for the Minority day of hearings, so that we can hear from key witnesses that you have continually blocked from testifying,” Rep. Nunes said.

(Related: Before Grilling Sondland, Nunes Exposes What Schiff’s “Bathroom Break” Was Really About: “That Was Dems [Holding] A Press Conference”)