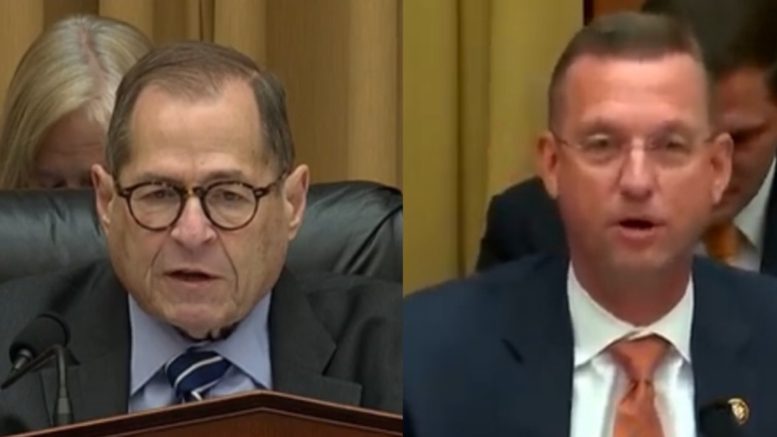 Rep. Doug Collins (R-GA), the ranking member of the Judiciary Committee, sent a letter Saturday to Jerry Nadler (D-NY) calling on the Chairman to expand the panel beyond the four constitutional law scholars from whom the Judiciary Committee plans to hear from this week during a hearing titled: “The Impeachment Inquiry into President Donald J. Trump: Constitutional Grounds for Presidential Impeachment”, which is scheduled for December 4 at 10 a.m. on Capitol Hill.

This comes as the House Intelligence Committee will send the Judiciary Committee a memo with its findings from their seven public impeachment hearings and the closed-door depositions regarding President Trump’s dealings with Ukraine.

In his letter to Chairman Nadler, ranking member Collins wrote:

“On Wednesday, December 4, 2019, the House Judiciary Committee (the “Committee”) is scheduled to hear testimony on the constitutional grounds for presidential impeachment from four scholars. To ensure fairness and restore integrity to the ongoing impeachment process, I request an expanded panel and a balanced composition of academic witnesses to opine on the subject matter at issue during the hearing.

Historically, the Committee has called upon a robust slate of academics — representing a spectrum of scholastic and political viewpoints — to expound upon the somber subject of removing a duly-elected president. For example, during the impeachment inquiry of President William J. Clinton, the Committee assembled two panels of ten and nine academics, respectively, to help the Committee grapple with impeachment.

On December 4, the Committee will hear from only four academic witnesses during its consideration of the question of impeachment. This is less than a quarter of those called to testify during the Clinton impeachment. In light of this, I request that you expand the number of witnesses called upon to testify on December 4 to give the American people a wider array of perspectives regarding impeachment. I further request that you equally allocate those witnesses to the majority and minority’s choosing.

The Committee must ensure it maintains its credibility and its historically preeminent role in the impeachment of presidents by not rushing to articles of impeachment or hearing only from scholars with demonstrated animosity towards the President. Throughout this hurried and partisan impeachment process, I have consistently requested mere fairness from members of the majority. An equal distribution of experts for the December 4 hearing would be a small concession to demonstrate to the American people this impeachment inquiry is not merely political theater.”

Rep. Collins’ letter did not clarify which witnesses the Republicans would seek to call, however.

“I am prepared to schedule a meeting of the Committee on Monday, December 9, 2019 to consider any such referrals,” Nadler wrote to Collins, reported The Hill.

The Judiciary Committee will ultimately decide whether to the evidence gathered during the probe warrants drafting articles of impeachment that will be voted on by the entire House. (Continued Below)

On November 14, Rep. Collins sent Nadler another letter calling on the chairman to prioritize due process and ensure fairness in impeachment proceedings conducted by the Judiciary Committee.

“On June 22, 2016, during hearings exploring the potential impeachment of IRS Commissioner Koskinen, you said: ‘The power of impeachment is a solemn responsibility, assigned to the House by the Constitution, and to this Committee by our peers. That responsibility demands a rigorous level of due process,'” Collins wrote in his November 14 letter.

“Now that Congress is officially engaged in a so-called ‘impeachment inquiry,’ it is incumbent upon you and the Democratic caucus to be faithful to your prior statement and to prioritize due process. In light of this, I hope that you join me in demanding the House take the same steps as have historically been taken to ensure fairness throughout impeachment proceedings,” he said.

“If this Committee will not hear from fact witnesses, will we again be relegated simply to hearing the opinions of cable news pundits and partisan academics?” Collins asked. (Continued Below)

Rep. Doug Collins’ tweeted his letter to Nadler calling on the Chairman to expand the panel beyond the four constitutional law scholars:

The least Chairman Nadler can do to show an ounce of fairness to the American people—and indicate that Judiciary proceedings will be more than raw political theater—is allow an equal distribution of witnesses for Wednesday’s impeachment hearing.https://t.co/MA5hYfumcd

Rep. Doug Collins will be on “Fox News Sunday” tomorrow to discuss the hearing:

(Related: In Another Letter, Nadler Sets A Deadline For Pres Trump To Decide If He Wants To Participate In The Formal Impeachment Hearing)