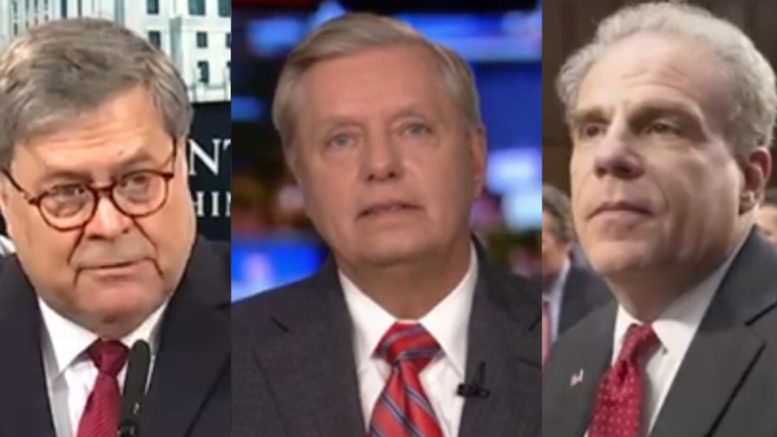 The Washington Post reported on Monday that Attorney General Barr has told associates that he disagrees with Inspector General Michael Horowitz’s determination that the FBI had sufficient information to launch a counterintelligence investigation into members of the Trump campaign in the summer of 2016.

Senate Judiciary Chairman, Lindsey Graham (R-SC), spoke with host Sean Hannity Monday on Fox News after The Post reported their alleged story, and said to “be wary of reports on what is coming up with Horowitz”.

Senator Lindsey Graham warned that the findings in the inspector general’s investigation into alleged surveillance abuses against former Trump campaign adviser Carter Page are being minimized by the media outlets getting the leaks.

“Be wary of the Washington Post and the New York Times reporting on what is coming up with Horowitz. They have been trying overtime to spin this thing to diminish its effect, to downplay it,” the South Carolina Republican warned.

“I can tell you without any hesitation Attorney General Barr has every confidence in the world in Mr. Horowitz,” Graham added. “He believes that he has done a good job, a professional job, and he appreciates the work and the effort he has put into disclosing abuse at the Department of Justice.”

On Saturday, House Intelligence ranking member, Devin Nunes (R-CA), spoke with host Judge Jeanie Saturday where they discussed the upcoming Inspector General’s FISA report that is expected to be released on December 9, and he suggested the leaks that are coming out is from “the version that the dirty cops have”. (Continued Below)

Michael Horowitz is expected to testify before Senator Graham’s committee on December 11 and the Senate Judiciary Chairman said he wants the DOJ watchdog to answer questions pertaining to the Steele dossier.

DOJ spokeswoman Kerri Kupec released a statement Monday praising Horowitz’s work and urged people to avoid speculation about his report before it is released. (Continued Below)

Leaks about a draft report show Horowitz found missteps and lapses in judgment by the FBI but no political bias by top officials tainting the Russia investigation, as Trump and his allies have claimed. Early reports have also asserted that investigators found no evidence of spying on the Trump campaign, although they acknowledge informants and electronic surveillance methods were used by the FBI to collect information about members of the team, as reported by The Washington Examiner.

The Attorney General said in April that he believes “spying did occur” on the Trump campaign.

“I think spying did occur. The question is whether it was adequately predicated. I think it’s my obligation. Congress is usually very concerned with intelligence agencies and law enforcement agencies staying in their proper lane,” he said.

Barr also noted that “spying on a political campaign is a big deal.” (Video Below)

In May, Attorney General Barr appointed U.S. Attorney John Durham to investigate the origins of the Russia investigation to determine if the FBI’s “spying” on the Trump campaign in 2016 was adequately predicated.

Durham’s investigation has transitioned into a full-fledged criminal investigation and now, he has the ability to impanel a grand jury, issue subpoenas, and file criminal charges.

Related: James Clapper: ‘It’s Disconcerting To Be Investigated For Having Done Our Duty & What We Were Told To Do By The President’