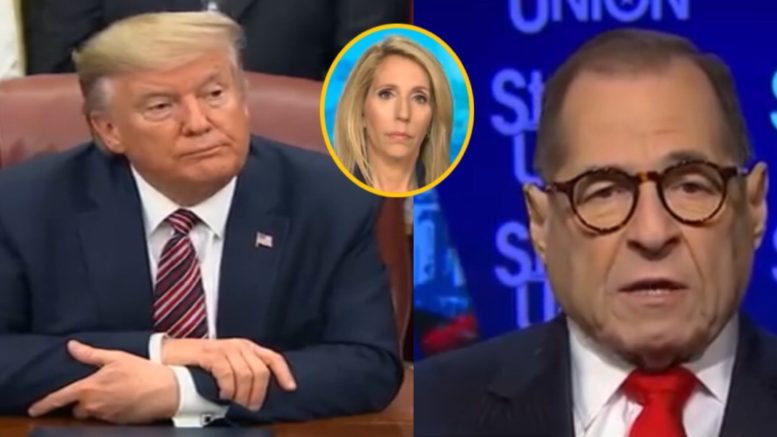 House Judiciary Committee Chairman Jerry Nadler (D-NY) spoke with host Dana Bash Sunday on CNN‘s “State of the Union” and was pressed on the evidence that the committee will be bringing forward pertaining to articles of impeachment against President Donald J. Trump.

Nadler, however, told Bash that the Democrats have a “rock-solid case” for impeachment and a jury would convict the president in “three minutes flat”.

Dana Bash told Chairman Nadler: “Let’s talk about the substance of your case for impeachment. House Republicans, as you know, released a rebuttal to the Democratic impeachment report saying The Democrats have not proven a quid pro quo. Here’s what it says: ‘There is, however, no direct, firsthand evidence of any such scheme. The Democrats are alleging guilt on the basis of hearsay, presumptions, and speculation.'”

“Do you feel comfortable that you and your fellow Democrats have conclusively proven that the hold up on military aid was in exchange for investigations and that most importantly, it was a direct order from the president himself?” Bash asked Nadler.

Bash countered: “But do you feel comfortable the thing was directed by the president himself? Do you feel that you have a rock-solid case?” (Continued Below)

“Yes. We have a very rock-solid case. I think the case we have if presented into a jury, would be a guilty verdict in about three minutes flat,” Nadler claimed. [Emphasis added].

“And all this nonsense about hearsay evidence, there is considerable direct evidence. … The reason we don’t have even more evidence is the president has ordered everybody in the executive branch not to cooperate with Congress in the impeachment inquiry– something that is unprecedented in American history and is a contempt of Congress itself,” he added. (Video Below)

Chairman Nadler: "We have a very rock solid case. I think the case we have, if presented to a jury, would be a guilty verdict in about three minutes flat." Via CNN pic.twitter.com/cBTGJK5GjZ

Dana Bash also pressed Nadler on “obstructing justice of Congress”, by not handing over documents or by not allowing witnesses to testify.

“The founders who we heard a lot about in your committee last week, set up a ‘third’ coequal branch of government, the courts, to resolve differences like this. But you have not even tried to go to the courts to compel these witnesses to testify” she directly told Nadler.

Nadler said he went to the courts with Don McGhan and other people, but Bash pushed back again informing him that he or his committee have not gone to the courts pertaining to the impeachment inquiry in relation to Ukraine. (Continued Below)

“What we have found is that the courts take months and months,” he indirectly admitted why they are moving so fast.” But we don’t need to go to the courts. The Article 1 power, which is Congress’ power, is the sole power to try impeachments, should not be and has never been dependant on the courts. The president and the executive branch are duty-bound to cooperate with Congress in any legitimate inquiry.”

“And the president’s absolute failure to do so, and defiance, is an act against the separation of powers, against the Constitutional scheme, and shouldn’t require anything from the courts. The courts are a way to enforce this, but much too slow [of] a way,” he reiterated. [Emhasis added].

Bash countered: “You told CNN a month ago you wanted to do this ‘thoroughly’ saying ‘If it’s going to be done, it’s got to be done right. And whatever time it requires it will take.’ So what changed?”

“Nothing has changed, except for the fact that we have gotten all ‘extremely’ persuasive evidence on the blackmail against Ukraine to try to interfere in our election,” he alleged. (Video Below)

Bash also pressed Nadler on bipartisan support of impeachment and played a clip of Nadler’s remarks from 1988 during Bill Clinton’s impeachment, to which he deflected.

(Related: Rep. Jordan Irritates Nadler After Asking When He Will Invite IG Horowitz To Testify: ‘I Don’t Know, We Haven’t Discussed That’