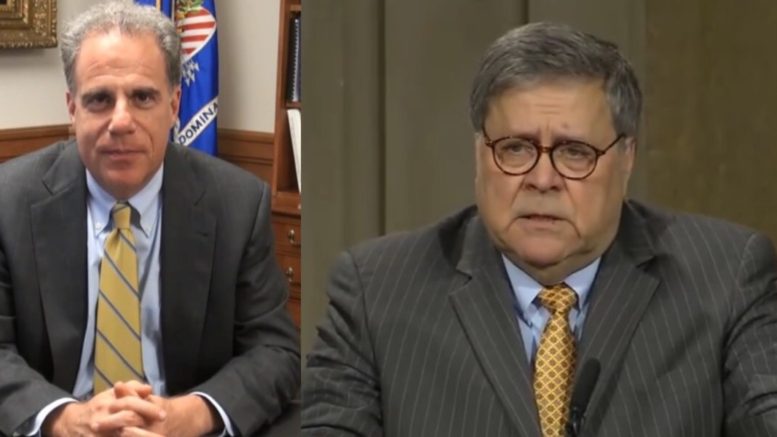 On Monday, the Justice Department inspector general, Michael Horowitz, released the long-awaited internal review pertaining to the origins of the Russia investigation. The report reveals that while the probe’s launch complied with DOJ and FBI policies, there are “significant concerns with how certain aspects of the investigation were conducted and supervised.”

The IG probe identified at least 17 “significant” errors in the Page applications and said they would launch a new audit into the FISA process.

The IG report, however, states that key officials including former FBI bosses James Comey and Andrew McCabe “did not act with political bias” and extended a similar finding to the overall surveillance efforts targeting Page. “We did not find documentary or testimonial evidence that political bias or improper motivation influenced the FBI’s decision to seek FISA authority on Carter Page,” the report said.

IG Michael Horowitz and his investigators probed how the unverified anti-Trump dossier compiled by former British spy Christopher Steele was used to secure the original FISA warrant for Page in October 2016, as well as other decisions at the outset of the FBI’s counterintelligence investigation of Russian election interference and the Trump campaign, per Fox News.

Nunes blasted the FBI for not revealing that evidence used to support the warrant application came from an unverified dossier compiled by Steele as opposition research for Hillary Clinton’s campaign. Democrats have pointed to a footnote in the warrant application that gave a general characterization of the nature of the information and how the FBI believed that it was part of an effort to get information to discredit Trump’s campaign, though it did not specifically mention Clinton or the Democratic National Committee, per Fox News.

Horowitz’s team has questioned why the FBI considered Steele a credible source, and why the bureau seemed to use news reports to bolster Steele’s credibility.

Earlier this year, Attorney General William Barr said “spying” did occur against the Trump campaign during the 2016 presidential campaign. On Monday, he responded after the release of the DOJ’s IG report. (Continued Below)

“Nothing is more important than the credibility and integrity of the FBI and the Department of Justice.  That is why we must hold our investigators and prosecutors to the highest ethical and professional standards. The Inspector General’s investigation has provided critical transparency and accountability, and his work is a credit to the Department of Justice.  I would like to thank the Inspector General and his team.

The Inspector General’s report now makes clear that the FBI launched an intrusive investigation of a U.S. presidential campaign on the thinnest of suspicions that, in my view, were insufficient to justify the steps taken. It is also clear that, from its inception, the evidence produced by the investigation was consistently exculpatory. Nevertheless, the investigation and surveillance was pushed forward for the duration of the campaign and deep into President Trump’s administration.

In the rush to obtain and maintain FISA surveillance of Trump campaign associates, FBI officials misled the FISA court, omitted critical exculpatory facts from their filings, and suppressed or ignored information negating the reliability of their principal source. The Inspector General found the explanations given for these actions unsatisfactory. While most of the misconduct identified by the Inspector General was committed in 2016 and 2017 by a small group of now-former FBI officials, the malfeasance and misfeasance detailed in the Inspector General’s report reflects a clear abuse of the FISA process.

FISA is an essential tool for the protection of the safety of the American people. The Department of Justice and the FBI are committed to taking whatever steps are necessary to rectify the abuses that occurred and to ensure the integrity of the FISA process going forward. (Continued Below)

No one is more dismayed about the handling of these FISA applications than Director Wray.  I have full confidence in Director Wray and his team at the FBI, as well as the thousands of dedicated line agents who work tirelessly to protect our country. I thank the Director for the comprehensive set of proposed reforms he is announcing today, and I look forward to working with him to implement these and any other appropriate measures.

With respect to DOJ personnel discussed in the report, the Department will follow all appropriate processes and procedures, including as to any potential disciplinary action.”

Horowitz is scheduled to testify before the Senate Judiciary Committee Wednesday morning to answer questions about his probe.