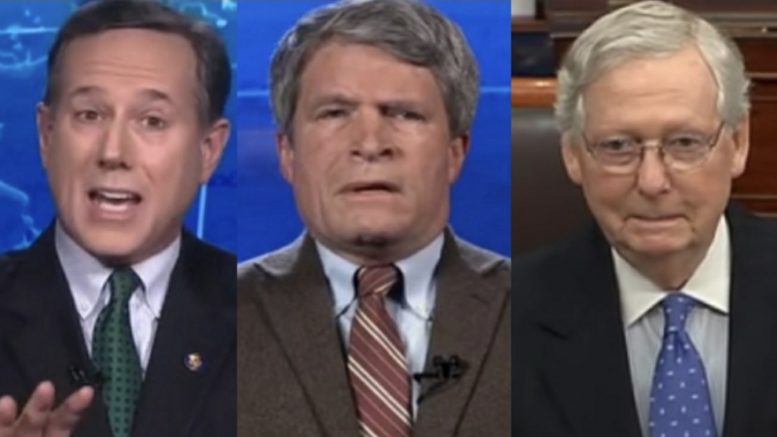 On Friday, former White House ethics lawyer Richard Painter made a controversial comparison while discussing the prospects of an impeachment trial in the Senate with other panelists on CNN.

Painter suggested Mitch McConnell is “impaneling an all-white jury for a Klansman trial” in reference to Senate Majority Leader indicating there will be “total coordination” with the White House in the event of an impeachment trial.

“For Mitch McConnell to say he’s working with the White House, coordinating with the defendant in this trial before the trial has even begun is atrocious,” Painter said.

“He may think he’s a judge impaneling an all-white jury for a Klansman trial in Mississippi in 1965,” he added. “That’s not the kind of trial we have.”

Former U.S. Senator Rick Santorum, who appeared to be set off by the comparison, stopped Painter in his tracks and told him he was being “absurd.”

Painter denied he was being absurd, but Santorum fired back: “Yes you are! I was there! I saw what Tom Daschle did in 1998, and I don’t think you were complaining one bit about him carrying the water for the president. This is typical, and I think completely appropriate.”

Santorum shot back, “Fine, but the Senate is the one that gets to make the rules. And there’s no requirement in the Senate to listen to witnesses. The Senate makes the rules based upon the allegations that are made and what is necessary to get a judgement in this case.” Video Below