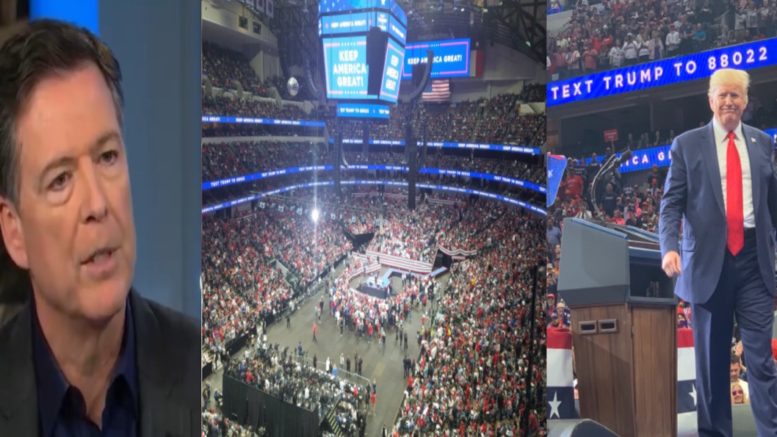 It is not clear which tweet(s) Comey was specifically referring to, but it is clear he apparently reads the president’s tweets.

James Comey expressed his irritation on Twitter by writing, “I often hear Trump supporters say they don’t pay attention to his tweets. But you must. And ask yourselves whether they reflect the values you want in a president and in America.”

Earlier in the month, Department of Justice Inspector General Michael Horowitz testified before the Senate Judiciary Committee pertaining to his findings of the FISA report. The DOJ watchdog vehemently shot down James Comey’s claim that report pertaining to FISA abuses “vindicates” the former FBI director. (Continued Below)

“So when Comey speaks about FISA, you shouldn’t listen,” Graham urged. “You should listen to Mr. Horowitz. He’s not vindicated. And to be concerned about the FISA warrant process is not nonsense.”

Twitterverse on Saturday was quick to respond to Comey’s complaints about the president tweets, to which it instantly backfired at the former FBI director. (Continued Below)

I often hear Trump supporters say they don’t pay attention to his tweets. But you must. And ask yourselves whether they reflect the values you want in a president and in America. What he tweets matters. Is that who you are? Is that who you want your kids to be? Don’t look away.

Never forget that this corrupt liar was referred for criminal prosecution by the Department of Justice inspector general. He lied to the president, he lied to Congress, and he lied to the American public, all to prevent his coruption from being discovered. https://t.co/YYgWi8qoX3

“Carter Page is a foreign agent.” James Comey under penalty of perjury to a secret court. https://t.co/WK5m8J8Mzc

You belong in Prison, and Lord willing you will be soon.

You are a traitor and the damage you did to the FBI and this country is beyond criminal.

You lied to Congress under oath quit getting so caught up with Tweets bro.

You lied under oath.

How many times does the IG have to rip your leadership of the FBI before you retire from public life?

I would be proud if I had a kid and It grew up to be like @realDonaldTrump. But I would be happy and proud as long as it didn’t grow up to be a scumbag like James @Comey.

No one is looking away. We’re looking directly at you, Comey. We’re looking at a dirty cop who’s going to pay. Durham’s on to you and you can’t stand in his way. There’s no doubt now that you’ll be put away. For a very long stay.

You really think you’re in the position to preach about values, @Comey? You ran a spy operation against a presidential candidate & president. Has Durham been around to visit yet?

I am going to enjoy watching you get arrested! Check out my tweets!

Now they all lose including you James pic.twitter.com/mYniaUHHUT

Agreed, do not look away: pic.twitter.com/vRIQ5lMooW

DONT YOU EVER TELL ME WHAT TO THINK! This is the consequence of not locking up criminals who worked in the Department of Justice & the Federal Bureau of Investigation. Your tweet convinces me none of u disgusting people will ever be charged, indicted or prosecuted. Its a travesty

When do you go to prison?

His tweets are the only thing we pay attention to! The mainstream media is no longer reliable…show me one Tweet he had made that hasn't turned out to be true. Fact: @realdonaldtrump is always right.

And he says you are going down big guy… Better lawyer up.#MAGA

knowingly using a fake Dossier & lying about a CIA informant to get FISA warrants to take down a duly elected president doesn’t fall into our “values” Jim.

I watch for all of Trump’s tweets….and enjoy every one. He reflects EXACTLY the values I want to see in America — justice, value of God, saying Merry Christmas again, American greatness & prosperity. I thank God every single day for @realDonaldTrump

Comey was not the only one to complain about the president’s tweets on Saturday, however. CNN’s Victor Blackwell moaned about “who” the president was tweeting about and claimed, “Some of these [posts] aren’t even people. He tweeted bots and fan accounts of the conspiracy group QAnon,” adding that the network was not going to show the tweets on air to aid in the “spread of that junk.”

CNN is definitely not happy that @realDonaldTrump is retweeting #QAnon accounts… pic.twitter.com/rOOV8VHL2x