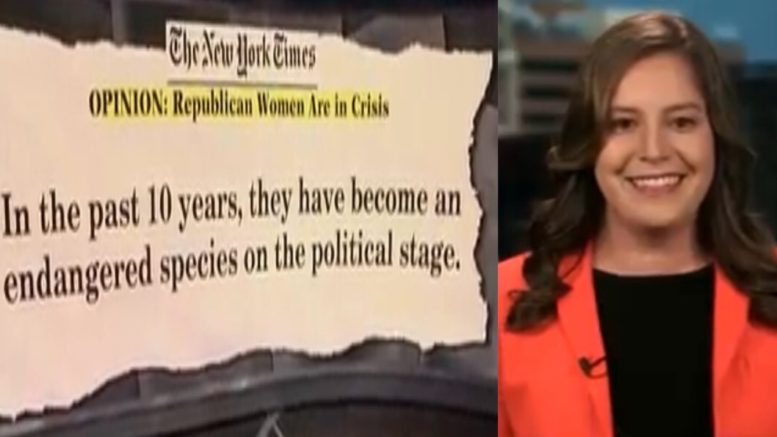 Rep. Elise Stefanik (R-NY) spoke with “Fox & Friends” Saturday morning where she responded to an op-ed from The New York Times, who claimed Republican women have “become an endangered species” on the political stage.

Reacting to the Times article, Rep. Stefanik said that her voice was heard loud and clearly, adding, “Not only in my district but across the country.”

“That editorial, The New York Times, ignores the facts. We have a historic number of Republican women who are running for office, over 181. I’ve worked to help recruit those women– to support those women,” she shot back.

“We have effective conservative Republican women running in New York, California, Kansas, Texas, and most importantly in the seats that will determine the House majority,” Rep. Stefanik explained.

“As you can see, Democratic numbers are taking because of their obsession with impeachment. And, it’s very sad to watch Democratic candidates for president running for the Commander in Chief job, refusing to call [Qasem] Soleimani a terrorist,” she said.

“The fact that Elizabeth Warren had to retract [her] statement, shows where the Democrat party is going, which is further and further to the left, and out of touch with the American people and voters, who will determine the next president. And, I believe that next president will be President Trump,” the New York Congresswoman expressed. (Continued Below)

Asked sarcastically if she counts a little bit less as a woman’s advocate to the elite media because she is a Republican, Rep. Stefanik replied, “The elite media and the establishment media loves to attack Republican women. I’ve experienced that first hand. But the good news is, Republican women are fighting back.”

“They’re raising their hand to run for office and as I said, we have a historic number of Republican women who are already on the ballot– 181 are running for Congress across the country. That’s more than ever before. And I think we’re going to run on issues like strong national security, a booming economy, strong border security and standing up for Constitutional liberties. Those are values that will attract Republican women voters and attract women voters across the country,” Stefanik explained.

When asked what it felt like to become a target for standing up and letting her voice be heard, she said, “I did become a target. I was smeared by the Hollywood left, people like Rosie O’Donnell and Chelsea Handler. But every day of the week, I choose the north country of New York over Hollywood liberals. And I choose my district over people George Conway, who are just vile anti-Trumpers.” (Video Below)

“And my job is to focus on the constitutional issues and to focus on representing my district, which is exactly what I did in the intelligence hearings and I led the charge and fighting back against Schiff’s partisan charades. And if you want to support me, donate to FightSchiff.com to help us fight back against the Hollywood liberals, who have smeared me,” Rep. Stefanik added.

(Related: Rep Stefanik: “Schiff Will Continue To Silence Republican Members Because He Doesn’t Want To Hear The Truth”)