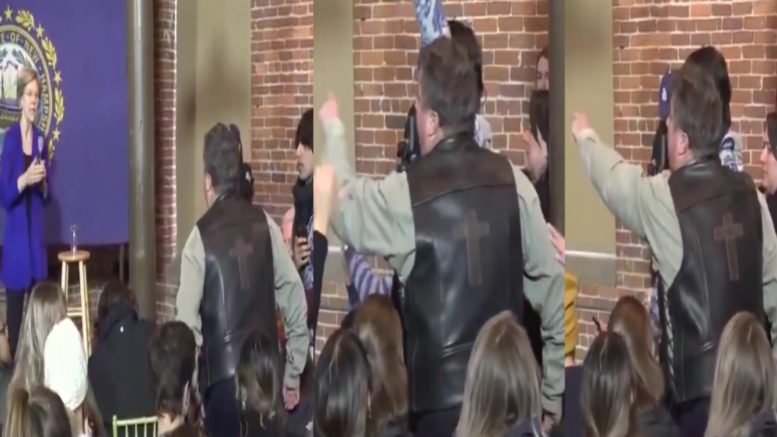 During a campaign event in Dover, New Hampshire on Friday, Democratic presidential candidate Elizabeth Warren was interrupted by an angry protestor who asked her why is she “siding with terrorists?”

This comes after the way the Massachusetts Senator has described Gen. Qassem Soleimani, who was killed in an American airstrike at Baghdad International Airport Thursday night.

Monday on the Senate floor, Kentucky Senator Mitch McConnell pointed out Elizabeth Warren walking back her comments to appease the far-left: “Soon after the news broke, one of our distinguished colleagues made a public statement that rightly called Soleimoni a murderer and then, amazingly walked that message back when the far-left objected to the factual statement. Since then, I believe all her criticism is directed at our own president.”

On Tuesday, Warren spoke with “The View” and was grilled by Meghan McCain over her flip-flopping. “You issued a statement calling Soleimani a murderer. Later you issued a second statement saying he was an ‘assassination of a senior foreign military official’”, McCain said to Warren. “I don’t understand the flip flop. I don’t understand why it was so hard to call him a terrorist. I would just like you to explain.”

“This isn’t a change,” Senator Warren said of her two statements. “They’re truth.” After twice describing Soleimani as “part of a group” designated as terrorists, Warren finally said “of course” Soleimani was himself a terrorist.

On Friday, a protestor called out Warren by suggesting that she is a “fraud and siding with Iran and terrorists.” (Continued Below)

The crowd started to boo and appeared to not even acknowledge what the protestor was telling the Democratic candidate. Warren responded to the crowd and the protestor: “No, no. This is a man who is deeply upset. It’s alright. It’s time for you to leave,” she said.

“Trump is right, you’re a fraud! I’m a minister. I help rape victims and you’re lying!” the protestor yelled. (Video Below)

The crowd began to chant “Warren, Warren,” and then the Massachusets Senator responded, “Let him go. It’s alright. It’s time to go.”

The protestor was then directed to leave and it appeared he was told that he “disrupted Elizabeth Warren”, but he shot back and yelled: “Disrupt her? She likes Iran.”

A protestor yells at Elizabeth Warren that she’s siding with Terrorists. pic.twitter.com/t5uvI15oT6

After the protestor left, Warren turned the subject on President Trump and suggested he killed Soleimoni to distract from impeachment. A readout of the transcript from the rally is as follows:

Last Sunday in an interview with CNN’s Jake Tapper, Warren also questioned the timing of President Trump’s decision to eliminate Iranian military leader Qassem Soleimani. She insinuated the Commander in Chief may have taken the decisive action to distract from his pending impeachment trial that is set to take place in the Senate within weeks.

(Related: After Being Briefed, Rep. Omar Declares The ‘Attack’ On Soleimani Was ‘Motivated By Blind Ideology’)