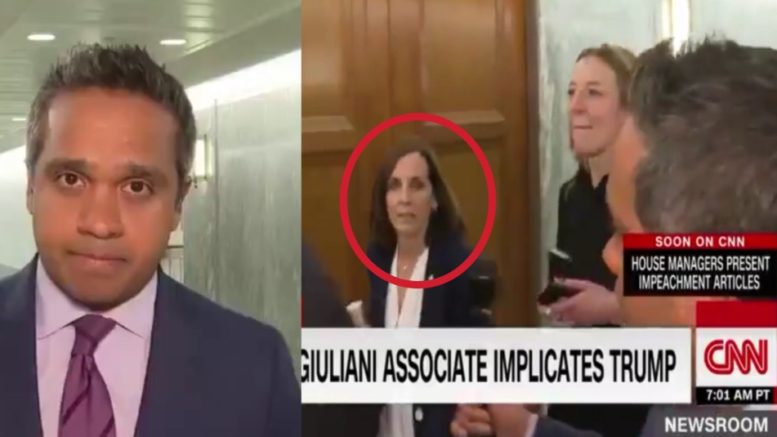 Sen. Martha McSally (R-AZ) shot down CNN reporter Manu Raju Thursday after he asked her whether recent developments would make her reconsider her position on impeachment against President Trump.

On Wednesday night, Rudy Giuliani’s Ukrainian associate Lev Parnas claimed that “Trump knew” about the events taking place in Ukraine. “President Trump knew exactly what was going on. He was aware of all my movements. I wouldn’t do anything without the consent of Rudy Giuliani or the president,” Parnas said.

On Thursday morning, the CNN reporter tried to ask Senator Martha McSally about the developments and how it could change her impeachment vote.

McSally responded, “Manu, you’re a liberal hack. I’m not talking to you.”

Raju tried again: “You’re not going to comment.” McSally instead, ignored his question off reiterated, “You’re a liberal hack.” (Continued Below)

Raju took to Twitter after the Arizona Senator brushed him off to say: “Sen. Martha McSally, a Republican facing a difficult election race, lashed out when I asked if she would consider new evidence as part of the Senate trial. ‘You’re a liberal hack – I’m not talking to you. You’re a liberal hack.’ She then walked into a hearing room.”

Senator McSally doubled down on the CNN reporter by tweeting the video and adding: “You are. Here’s the video.”

In November, House Intelligence ranking member Devin Nunes (R-CA), told CNN reporter Oliver Darcy, “I don’t talk to you in this lifetime or the next lifetime. At any time. On any question.” This came after CNN ran a story claiming Nunes went on a trip to Vienna last year with a former Ukrainian prosecutor to discuss digging up dirt on Joe Biden. Nunes afterward, filed a $435 million defamation lawsuit against CNN. (Video Below)

Q: Senator McSally, should the Senate consider new evidence as part of the impeachment trial?

McSally: You’re a liberal hack I’m not talking to you

Manu- You’re not going to comment about this?
McSally: You're a liberal hack. pic.twitter.com/IW5pCfZ6Oa

When CNN approached @DevinNunes for comment on this story, he replied, “I don't talk to you in this lifetime or the next lifetime.”

CNN’s public relations team later responded to Senator McSally’s remark, stating, “It is extremely unbecoming for a U.S. Senator to sink to this level and treat a member of the press this way for simply doing his job.”

"It is extremely unbecoming for a U.S. Senator to sink to this level and treat a member of the press this way for simply doing his job."