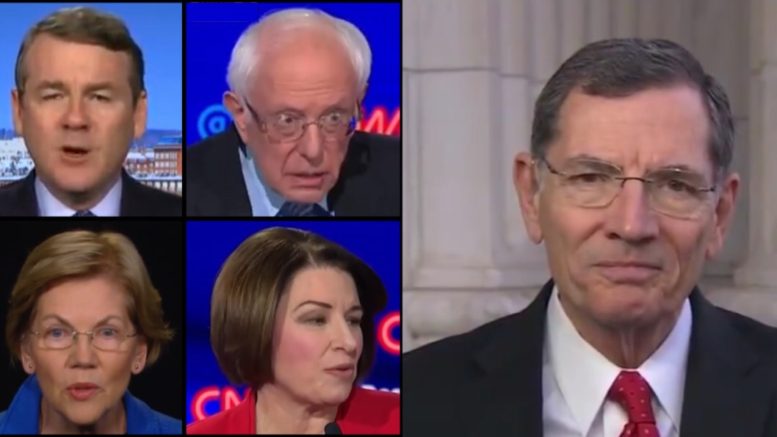 Sen. John Barrasso (R-WY) spoke with CNN’s Dana Bash on Thursday to respond to questions about Democrats who are calling for more witnesses to testify in the Senate impeachment trial, and at the same time, he also exposed the “conflict of interest” that is shared by four Democratic Senators.

Barrasso believes he may have all the information he needs to cast a vote without witnesses, based on the evidence the House presents, the defense from the President’s counsel, and the Senator’s questions during the trial.

Dana Bash told Sen. Barrasso that House Democrats are trying to make the point that they could make a better argument for their case if they had first-hand knowledge testimony from former national security advisor, John Bolton.

“It’s the same argument that they continue to make– it’s what they brought forth from the House,” Senator Barrasso explained, to which Bash interjected to ask, “But wouldn’t it be more persuadable to you if you heard from someone like John Bolton who was actually there?”

Senator Marsha Blackburn (R-TN) has also called for the four Democrat Senators to recuse themselves from the Senate impeachment trial against President Donald Trump, on the grounds that they cannot be impartial.

“When you look at the fact that these four candidates are spending hundreds of hours and millions of dollars to defeat Donald Trump and they take an oath to provide impartial justice, I think that is a difficult standard for them to meet,” Senator Blackburn told Fox Business’ Maria Bartiromo. “And I have recommended that this would be a good thing for them to step aside from the trial.” (Video Below)

Sen. Barrasso: Democrats running for president are “voting to remove” Trump “from the ballot in 2020”https://t.co/POy5t5AVmT pic.twitter.com/Tts1IHPWwm

In voting to remove @realDonaldTrump from office, the 4 Senate Democrats running for president have a conflict of interest. Their impeachment vote would remove their opponent from the 2020 ballot. I discussed these & other impeachment details today with @DanaBashCNN. pic.twitter.com/fBliA8CdnU

(Related: Wolf Blitzer Says Sen. McSally Should Apologize For Calling Raju A ‘Political Hack’, McSally Fires Back: ‘I Call It Like It Is’)