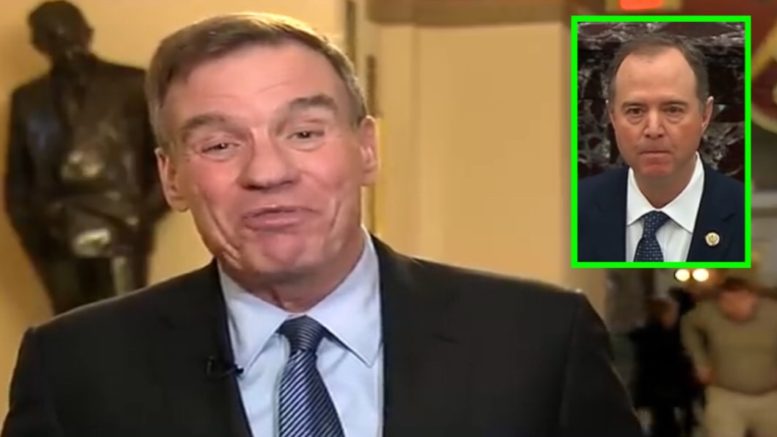 Warner told Hemmer that he has not made a decision on how he will vote yet on the articles of impeachment presented to the Senate, saying he “took an oath and owes both sides”, the President and the House managers, the chance to present their case.

The Virginia Senator asserted that Democrats and Republicans have reached the same conclusion in that Russia interfered in 2016 and not Ukraine. “[There is] no basis of fact at all that the notion that somehow Ukraine was behind these activities,” he stated.

Politico reported, however, in January 2017, that Donald Trump wasn’t the only presidential candidate whose campaign was boosted by officials of a former Soviet bloc country.

Ukrainian government officials tried to help Hillary Clinton and undermine Trump by publicly questioning his fitness for office. They also disseminated documents implicating a top Trump aide in corruption and suggested they were investigating the matter, only to back away after the election. And they helped Clinton’s allies research damaging information on Trump and his advisers, a Politico investigation found. (Continued Below)

Senator Warner also said that he wants to hear from the president’s lawyers and wondered if they are going to “roll back the factual presentation, or are they going to simply say the president’s behavior didn’t rise to the level of an impeachable offense?”

“I’m anxious to hear from the president’s lawyers and then have a chance to ask questions before I make a decision,” he said.

Asked what are conversations in the hallway among his colleagues, particularly Republicans, Senator Warner claimed, “I’ve got a lot of friends on the Republican side. … I think there was a lot … my Republican friends, who John Kennedy and Lindsey Graham, who said even they acknowledged that Schiff, I think, did a fairly presentable case last night.” (Continued Below)

“I do think there was a lot of questions raised by the powers of Schiff’s arguments. … I don’t know many of my Republican friends who actually think there’s any validity to this notion that somehow Ukraine was involved in the 2016 intervention. I do think frankly, most of my Republican friends have urged the president to walk away from that debunked theory,” Warner added.

Alexandra Chalupa, a former Democratic National Committee contractor and staffer, who dug for dirt on the Trump campaign with help from Ukrainian officials, was on the GOP list. Her most important role to date appears to be her investigation into Paul Manafort, President Trump’s former campaign manager, and his ties with Russia — which she conducted with the help of Ukrainian officials, as reported by New York Post.

The investigation provoked a firestorm in 2017 and prominent Republicans such as Sen. Chuck Grassley publicly accused Chalupa of working with Ukraine, the DNC and the Clinton campaign to undermine Trump’s candidacy. (Video Below)

For the record, Senator Lindsey Graham said, “[Schiff] took bits and pieces of the evidence and did a good job of creating a quilt out of it.”