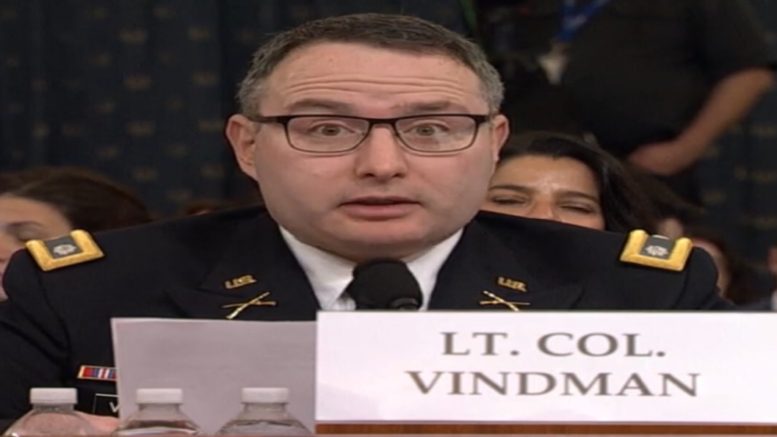 Lt. Col. Alexander Vindman was fired Friday by the National Security Council and escorted off of the White House grounds, two days after the president’s acquittal in his Senate trial.

While taking questions from reporters Friday, President Trump told the press that he was “not happy with him,” adding, “You think I’m supposed to be happy with him? I’m not,” Trump said, saying that a decision would be made soon.

Vindman’s attorney, David Pressman, confirmed that Vindman had been escorted out of the White House on Friday, in a statement.

“There is no question in the mind of any American why this man’s job is over, why this country now has one less soldier serving it at the White House,” Pressman said. “LTC Vindman was asked to leave for telling the truth. His honor, his commitment to right, frightened the powerful,” he said, in part.

Fox News reported that Vindman’s twin brother Lt. Col. Yevgeny Vindman has also left the National Security Council. Yevgeny Vindman was assigned to the office that vetted publications like former national security adviser John Bolton’s book – though he has said he was not involved in the vetting of the Bolton manuscript.

The news comes after reports that the White House was weighing options to dismiss Vindman from the NSC in an effort to shrink its foreign policy bureaucracy. Bloomberg reported Thursday that the White House planned to frame Vindman’s exit as part of an NSC staff downsizing, not retaliation. (Continued Below)

During the House impeachment inquiry, Vindman admitted that he gave out information about the president’s July 25 phone call to people “outside of the White House.”

In October, former Fox News’ Chief Intelligence correspondent, Catherine Herridge, pointed out the law Lt. Col. Vindman may have violated with his post-Ukraine phone call actions, according to his opening statement of his deposition that was conducted behind closed doors.

“One thing that caught my attention is that Vindman said he shared it with people who were relevant and had sort of a ‘need to know’ and ‘proper security clearances,’” Herridge had said. “The reason that matters is that presidential phone calls are ‘highly classified’, and if they’re shared with people who don’t have a ‘need to know’, that would be a potential violation of the ‘leaking statute’, which is 18 U.S.C. 798”. (18 U.S.C. 798: Disclosure of classified information) (Video Below)

In November, Rep. Brad Wenstrup (R-OH), questioned Vindman about the steps he took to report his concerns about the July phone call between President Trump and Ukranian President Zelensky and caught the NSC official in a lie when he didn’t follow his chain of command.

On Friday, Catherine Herridge tweeted: “Breaking: Lawyer for impeachment witness Lt Col Vindman tells CBS News that he was escorted out of the White House, and his brother. Pentagon official says Vindman will return to Dept. of the Army for assignment until his Army War College class starts this summer.”

Breaking: Lawyer for impeachment witness Lt Col Vindman tells CBS News that he was escorted out of the White House, and his brother. Pentagon official says Vindman will return to Dept. of the Army for assignment until his Army War College class starts this summer. #impeachment

(Related: Rep Stewart Slams Vindman Over His Assertion That Trump’s Request Was A “Demand: “I Think It’s Nonsense”)