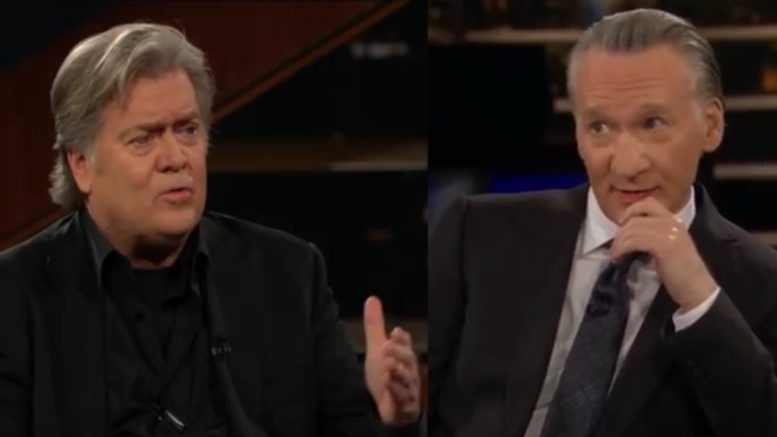 Former White House chief strategist Steve Bannon spoke with HBO’s Bill Maher Friday and destroyed the “Real-Time” host on his own show, over the election process.

Maher began the show by telling Bannon, “Look, I’m not gonna lie about it. Your boy had the best week so far,” referring to President Trump being acquitted in the Senate on Wednesday after months-long of the Democratic impeachment saga.

Steve Bannon explained that President Trump’s actions, throughout his entire presidency, are the key to his success, naming the middle east peace plan, USMCA, and fixing the opioid crisis … “One action after another,” he said.

“Trump is about to run the tables. You have a totally divided [Democratic] party. Nobody sat there and said after 2016, ‘Why did we lose?’ Trump reached out to these working-class people and connected with them. It’s the same arrogance you see in Iowa about this app,” Bannon told Maher.

Mahar complained though, that Democrats lose because of the “electoral college”, but Bannon shot back to say, “It’s a Republic, sir. This is what I love about you guys: you gotta whine about everything. It’s match play, not metal play. You know what the rules are, and you can’t win.”

The audience began to cheer and Bannon told Maher to his face: “With this attitude, we’re gonna keep winning”. (Continued Below)

Bannon also noted that after the Iowa Caucus fiasco: “The Bernie people are gonna help make Trump president again, because he’s been screwed by the Democratic Party,” to which Maher admitted that even he “didn’t want that much socialism”.

“[Trump’s united his party, he’s got the economy on his side,” the former White House chief strategist said.

As the show was ending, Maher told Bannon, “I wish we had someone on our side as evil as you, Steve,” after complaining earlier in the interview about President Trump calling out his enemies with names. (Video Below)