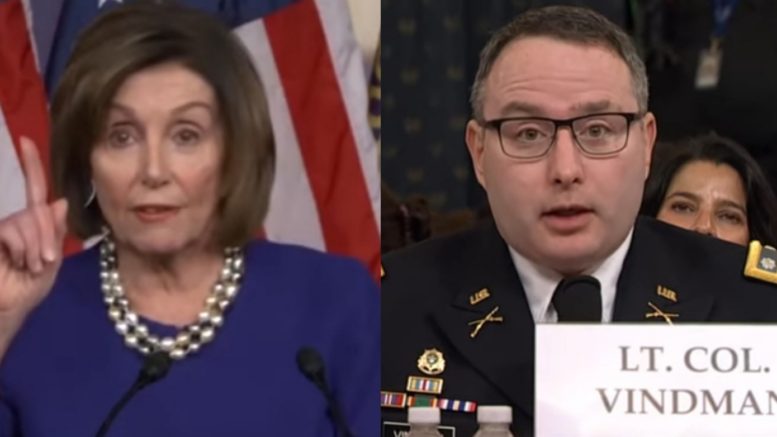 House Speaker Nancy Pelosi released a statement in wake of reports of Lt. Col. Alexander Vindman being let go from his position with the National Security Council on Friday..

Vindman, who testified against President Trump the in the Democrat-led impeachment inquiry, was fired and escorted off of the White House grounds, two days after the president’s acquittal in his Senate trial.

The news comes after reports that the White House was weighing options to dismiss Vindman from the NSC in an effort to shrink its foreign policy bureaucracy. Bloomberg reported Thursday that the White House planned to frame Vindman’s exit as part of an NSC staff downsizing, not retaliation.

Pelosi, however, called the firing of Colonel Vindman a “shameful firing” and a “clear and brazen attack of retaliation” by President Trump.

She also reiterated that Trump is “impeached forever” and Senate Republicans were “accomplices to “his coverup.” Continued Below

Here is Pelosi’s full statement that she released on her website:

“Lieutenant Colonel Vindman has proven to be an American patriot: on the battlefield when he earned a Purple Heart, and in the House trial when he spoke truth to power. His brave testimony showed America that right still matters.

“President Trump is impeached forever. The shameful firing of Colonel Vindman was a clear and brazen act of retaliation that showcases the President’s fear of the truth. The President’s vindictiveness is precisely what led Republican Senators to be accomplices to his cover-up. The firing of this patriotic soldier is a sad and shameless loss for America’s security.

“History will remember Lieutenant Colonel Vindman as an American hero.” Video Below

Here us video of Matt Gaetz reacting to the firing of Colonel Vindmam as well as Gordon Sondland, who was also removed from his post as U.S. Ambassador to the European Union: