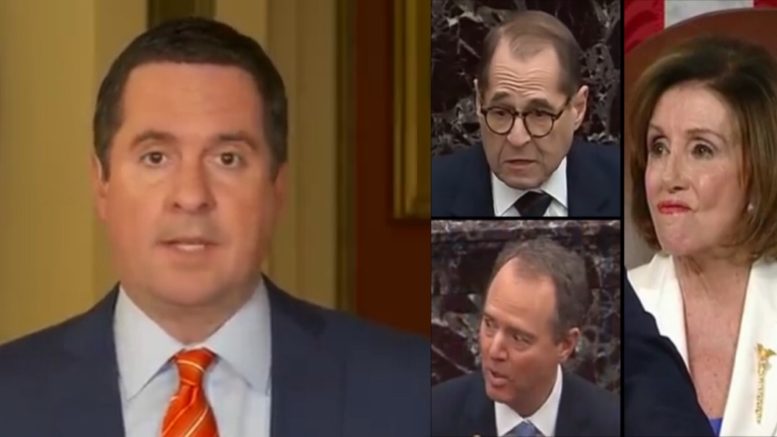 The ranking member of the House Intelligence Committee Rep. Devin Nunes (R-CA), spoke with “Fox & Friends” Monday during an interview and warned that the committee could be working on concocting a new hoax aimed at President Donald Trump in the wake of his Senate impeachment trial acquittal.

Rep. Nunes believes the Democrats on his committee may start with former National Security Advisor John Bolton and it would have support from the mainstream media.

“Well, I’d say that old habits die hard,” Rep. Nunes explained. “They’ve done nothing else for their entire time that they’ve controlled Congress and, don’t forget, the Democrats on the Intelligence Committee started this right after Trump was elected, so that’s going over three years.”

“I’m not sure that they actually know how to do anything else because, for all practical purposes, the Intelligence Committee in the House isn’t really meeting,” he revealed.

“So my guess is they’re going to start with John Bolton, maybe others. They may concoct a new hoax. I’m not sure that the American people will believe it. But you can be sure of one thing: the mainstream media will support whatever it is the narrative is that they want to build,” the ranking member of the House Intelligence Committee said.

“The National Security Council, number one, needs to be downsized. They don’t need hundreds of people. Number two: anyone that was there during the Obama administration, should be immediately removed from the White House and put somewhere else. I don’t care where they go, but just remove them from the White House,” Rep. Nunes said.

He is also convinced that many of the leaks that came from the White House are “highly likely” from the National Security Council. “That should be very concerning and I’ve been saying this for a long time. It’s sad that it’s taken a new National Security advisor to come in and start to clean this up,” he expressed.

“So I would just say, don’t let the door hit you on the way out. The media shouldn’t overexaggerate. Nobodies lost their job, they’re just gonna be moved back to another position,” Rep. Nunes added. (Video Below)