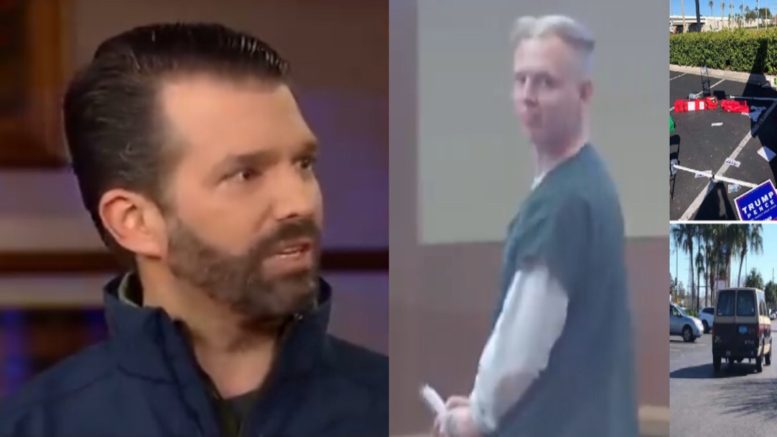 Over the weekend in Jacksonville, Florida, six Trump campaign volunteers were intentionally targeted while registering voters after a man drove his van through its voter registration tent in a Walmart parking lot, before fleeing the scene.

Gregory William Loel Timm, 27, was arrested Saturday and faces two counts of aggravated assault on a person 65 or older, one count of criminal mischief and one count of driving on a suspended license, the Jacksonville Sheriff’s Office said in a statement.

Republican officials called the incident a “politically motivated” attack, while President Trump tweeted about it Saturday, saying that “law enforcement has been notified,” adding, “Be careful tough guys who you play with.”

In a court appearance Sunday, a judge set his bond at $500,000, First Coast News reported.

During an interview on Fox News Tuesday, Donald Trump Jr., the president’s son, blasted Democrats and the left-wing media, for not covering the attack, saying “the silence was deafening.”

“The violence against conservatives and Republicans and Trump supporters is so prevalent and so underreported, if at all. If the shoe was on the other foot, and that was some sort of pretend crazy right-wing, alt-right, whatever person doing it to a Bernie Sanders or Elizabeth Warren, it would be the number one news story all over America,” Donald Trump Jr. explained. (Continued Below)

“There’s not a journalist that would not be covering it ad nauseam for weeks. But when it happens to a Trump supporter, ‘Eh, you know, hey’, Don Jr. said, imitating the left-wing media. “Honestly, it’s getting to the point of task complacency for the left and the media, which are basically the same thing at this point. It’s truly disgusting.”

Don Jr. believes the story would be “one of the largest, if not the largest, superseding all of the primary stuff, all the craziness in Iowa if it was the other way around.”

“When it happens to a Trump supporter, it’s okay, because they’re a Trump supporter. We can just condone that,” he said sarcastically of Democrats and the left-wing media. “It’s truly disgusting and I’m getting sick of it. And so are Americans.” (Video Below)

Asked about the anger and the vitriol of Gregory William Loel Timm, the man who was arrested for attacking the Trump supporters, when a clip was shown of him looking back at the cameras in the courtroom with what appeared as smugness, Don Jr. reiterated, “It’s truly disgusting.”

“If that same guy was a Trump supporter doing that, what would the headlines say? We all know what they would say. … You can’t even imagine what it would be, right? It’s so sickening, and again, that’s the environment in which we are,” he continued.

“That’s what the Democrats–because they won’t cover it, they’ve almost started condoning these sorts of attacks, and it’s truly disgusting. And I really look forward to someone on that side– someone in the media to have guts to actually say, ‘Enough is enough’. But I haven’t seen it guys, and it happens time and time again,” the president’s son added.

Why is no one covering the act of political terrorism on Trump supporters simply registering voters?

If the shoe was on the other foot it would be the biggest story of the month! Media/Dems bordering on complicit with their total silence on these attacks! pic.twitter.com/Ujbyn7Z5k5

Donald Trump Jr. asked “Where is the outraged media? Why are they so silent on this?”

Where is the outraged media? Why are they so silent on this? This would be the number one story in the world right now if it was a Trump supporter doing it to a group of liberals.

It’s a disgrace that they don’t even pretend to pay attention to growing leftist violence. https://t.co/Eca6pfip1v

(Related: Don Jr. Reacts As Swalwell Likens Dem Candidates To ‘The Avengers’ Heroes: ‘Zero People Would Want To Have [A Beer] With Swalwell’)