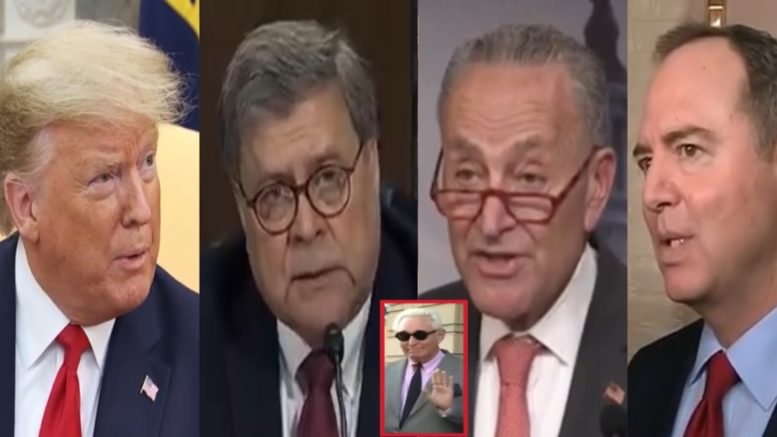 President Donald Trump took to Twitter Wednesday to praise Attorney General William Barr for taking “charge of the case” of Roger Stone, amid his pending sentencing.

According to Fox News, senior DOJ officials were also “shocked” that prosecutors handling Stone’s case were recommending between 87 and 108 months in prison.

As a result, the DOJ submitted an amended filing on Tuesday, where they told the judge that the government “respectfully submits that a sentence of incarceration far less than 87 to 108 month’s imprisonment would be reasonable under the circumstances,” but that the government “ultimately defers to the Court as to the specific sentence to be imposed.”

The move by the DOJ’s top brass ultimately led to four prosecutors, who were handling Stone’s case, to withdraw from their posts out of protest.

President Donald Trump took to Twitter Wednesday to say: “Congratulations to Attorney General Bill Barr for taking charge of a case that was totally out of control and perhaps should not have even been brought. Evidence now clearly shows that the Mueller Scam was improperly brought & tainted. Even Bob Mueller lied to Congress!”

He also tweeted: “Two months in jail for a Swamp Creature, yet 9 years recommended for Roger Stone (who was not even working for the Trump Campaign). Gee, that sounds very fair! Rogue prosecutors maybe? The Swamp! @foxandfriends @TuckerCarlson” (Continued Below)

According to Fox News, when Robert Mueller met with President Trump in May of 2017, Mueller was in fact, pursuing the open position as Director of the FBI, after James Comey was fired. While testifying last summer about his report, former special counsel Mueller, however, denied the claim, under oath, during congressional testimony.

Emails released in October through a Freedom of Information Act request by Judicial Watch indicated that Mueller knew there was a real possibility he could be named special counsel if he wasn’t chosen as the next FBI director.

“The boss and his staff do not know about our discussions,” then-Deputy Attorney General Rod Rosenstein said in an email to Mueller on May 12, 2017. Rosenstein’s boss was then-Attorney General Jeff Sessions, who had recused himself from the Russia probe, meaning the President would not have known either. The documents from Judicial Watch also include “off the record” emails with major media outlets around the date of Mueller’s appointment. (Continued Below)

Mueller, in his July Congressional testimony, denied the claim, saying he believed he was giving “input” to the president about the position. “My understanding was I was not applying for the job,” Mueller said on July 24, 2019. “I was asked o give my input on what it would take to do the job.”

Schumer sent a letter to Justice Department Inspector General Michael Horowitz on Tuesday saying the DOJ decision has “all the indicia of improper political interference in a criminal prosecution.”

“The American people must have confidence that justice in this country is dispensed impartially. That confidence cannot be sustained if the president or his political appointees are permitted to interfere in prosecution and sentencing recommendations in order to protect their friends and associates,” Schumer wrote. (Continued Below)

House Intelligence Committee Chairman Adam Schiff (D-CA) also asked for an investigation claiming that President Trump is “intervening through AG Barr” to seek a lighter sentence for people who are “covering up his own misconduct”.

Schiff tweeted on Tuesday: “Roger Stone lied to Congress and threatened a witness to cover up Trump campaign contacts with Wikileaks. He was found guilty on all charges. Barr overruling career prosecutors at Trump’s urging is a disgraceful attack on the rule of law. Has DOJ no independence left?”

“Sentencing recommendations countermanded, prosecutors punished, and enemies investigated. How do we measure the damage Bill Barr is inflicting on the independence, integrity and reputation of the Department of Justice? We can’t,” he continued.

On Wednesday, Schiff wrote on Twitter: “For those who were convicted of lying to cover up his crimes, Trump urges lighter sentences and dangles pardons. He demands his enemies be investigated and prosecuted. He retaliates against witnesses and public servants. Republicans’ response? Silence.” (Video Below)

Congratulations to Attorney General Bill Barr for taking charge of a case that was totally out of control and perhaps should not have even been brought. Evidence now clearly shows that the Mueller Scam was improperly brought & tainted. Even Bob Mueller lied to Congress!

Two months in jail for a Swamp Creature, yet 9 years recommended for Roger Stone (who was not even working for the Trump Campaign). Gee, that sounds very fair! Rogue prosecutors maybe? The Swamp! @foxandfriends @TuckerCarlson

Who are the four prosecutors (Mueller people?) who cut and ran after being exposed for recommending a ridiculous 9 year prison sentence to a man that got caught up in an investigation that was illegal, the Mueller Scam, and shouldn’t ever even have started? 13 Angry Democrats?