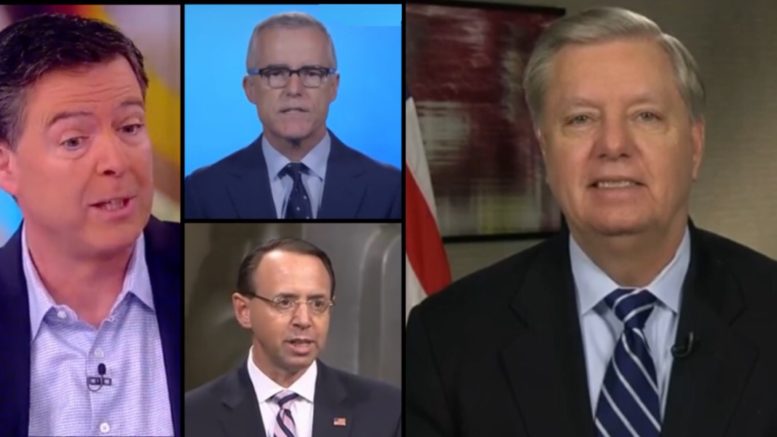 Senator Graham revealed questions he has going into committee’s investigation of the initiation of the Russia probe and the FBI’s use of the FISA to conduct surveillance of former Trump campaign adviser Carter Page.

Senator Graham’s investigation comes after Justice Department Inspector General, Michael Horowitz, released a 478 report that lists several significant inaccuracies and omissions on the part of the FBI in their FISA warrant applications where they mislead the court in the process.

A major aspect of the FISA report exposed how the FBI had relied on the unverified dossier, put together by ex-British spy Christopher Steele, was used as part of opposition research for Hillary Clinton’s campaign.

“What I’m gonna do is call the people who were investigating the counterintelligence investigation. You have 21 people involved that I’ve named,” Senator Graham said, referring to the letter he sent to Attorney General William Barr.

“Now I want to find out what did [Andrew] McCabe and [James] Comey know. When did they know that the dossier was unreliable? The Department of Justice has withdrawn the two warrant requests saying they were illegal. And in January of 2017, the primary Russian sub-source told four members of the Department of Justice and the FBI that the dossier was a bunch of bar talk and hearsay and not reliable,” Senator Graham explained. “I want to find out when Comey and McCabe understand when it was unreliable and work from there.” (Continued Below)

“I also want to know– in July of 2016, they tried to get a warrant and it was turned down. And it was McCabe [who] suggested the FBI Washington office go to New York. ‘They’ve got something in New York that might help you.’ It was the Russia dossier. So who told McCabe that the document was in New York? And if McCabe thought it would help him with the warrant, why didn’t he spend some time trying to find out if it was reliable?” the Senate Judiciary Chairman asked.

“Who knew what? When? Did [Rod] Rosenstein know that the dossier had been debunked by the time he signed the warrant? How could he not know?” Senator Graham wondered.

To begin the process in his committee, the South Carolina Senator said that he wants to start the investigation by calling the four individuals who met with the sub-source.

“I’m gonna ask the four people in the room when you heard from the Russian primary sub-source that this is a bunch of bar talk and hearsay and it’s not reliable, it was never meant to get a warrant– Steele is using it in a way different than I thought he would use it. I want to find out did any of those people tell anybody? Can you imagine working for the FBI and the Department of Justice– the most important investigation in the entire country, just fell apart? And you didn’t tell anybody?” Graham wondered.

“This whole thing is fishy as hell. I want to find out who knew what, when, and what they did with the information,” he stated.

Rosenstein oversaw the investigation due to the recusal of then-Attorney General Jeff Sessions. After President Trump fired Comey, it was Rosenstein who appointed Robert Mueller as Special Counsel in charge of the Russia investigation. (Video Below)

Senator Graham noted that he is going to have people from his staff and others interview the four people to get the foundation started. “Before I call McCabe and Comey, I want to find out exactly what happened,” he said.