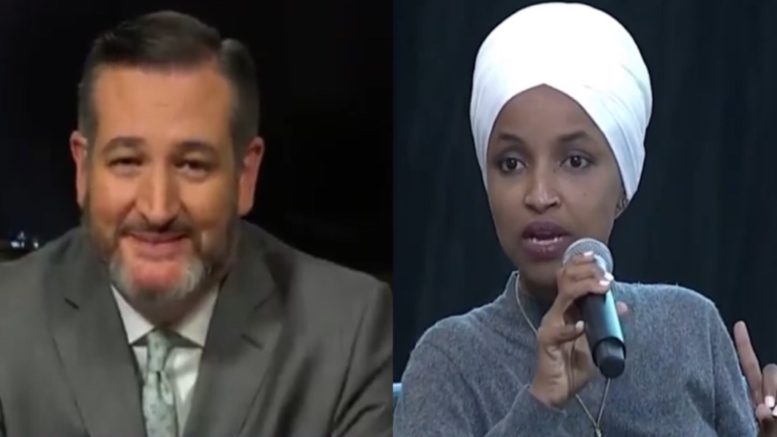 Rep. Ilhan Omar (D-MN) took to Twitter on Monday with a list of expressions that she described herself as, naming a few such as “Hijabi” and “Muslim”.

In her list, she was also proud to say that she “easily” triggers “conservatives” and “anti-Muslim bigots”. Senator Ted Cruz (R-TX) responded to Omar, wondering why “American” doesn’t make her list.

She went on to write in her post: “Easily triggering conservatives, Right-wing bloggers, anti-Muslim bigots, tinfoil conspiracy theorists, birthers, pay me a

to bash Muslims fraudsters, pro-occupation groups, and every single xenophobe since 2016

“She is a sitting member of the US Congress. But, in today’s Leftist world of intersectionality, ‘American’ is deemed embarrassing & gauche,” Cruz added. (Continued Below)

More than a little odd that “American” doesn’t make the list. Wonder why? She is a sitting member of the US Congress. But, in today’s Leftist world of intersectionality, “American” is deemed embarrassing & gauche. https://t.co/8cNGac9X0f

Earlier in the month, Rep. Ilhan Omar (D-MN), had tweeted an article from January 2016, titled: “Ted Cruz: ‘I’m a Christian first, American second.’ Imagine if Muslim or Jewish politician said that“, and included an emoji with her post of “eyeballs”.

Senator Ted Cruz (R-TX) responded to Omar saying that she “seems confused and/or dismayed by my being a Christian”, and gave her a history lesson on the sentiment he had expressed about his faith. In the article that Rep. Omar had tweeted, Senator Ted Cruz had responded to an ad and other attacks on his Christianity as well as his conservatism.

“I’m a Christian first, American second, conservative third and Republican fourth…I’ll tell ya, there are a whole lot of people in this country that feel exactly the same way,” the Texas Senator had expressed. (Continued Below)

In a 6 part series of tweets, Senator Ted Cruz gave Rep. Ilhan Omar a history lesson regarding his Christian faith:

2/x George Washington wrote in 1778, “While we are zealously performing the duties of good citizens & soldiers, we certainly ought not to be inattentive to the higher duties of religion. To the distinguished character of Patriot, it should be our highest glory….”

4/x Here’s how Dr. Martin Luther King Jr. put it in 1956, “The Christian owes his ultimate allegiance to God, and if any earthly institution conflicts with God's will it is your Christian duty to take a stand against it.”

6/x MLK: “…Never succumb to the temptation of becoming bitter. As you press on for justice, be sure to move with dignity and discipline, using only the weapon of love. Let no man pull you so low as to hate him. Always avoid violence.”

(Related: Tlaib Admits She & Omar Had To Hold Hands To Get Through ‘Moments Of Triggering’ During The SOTU)