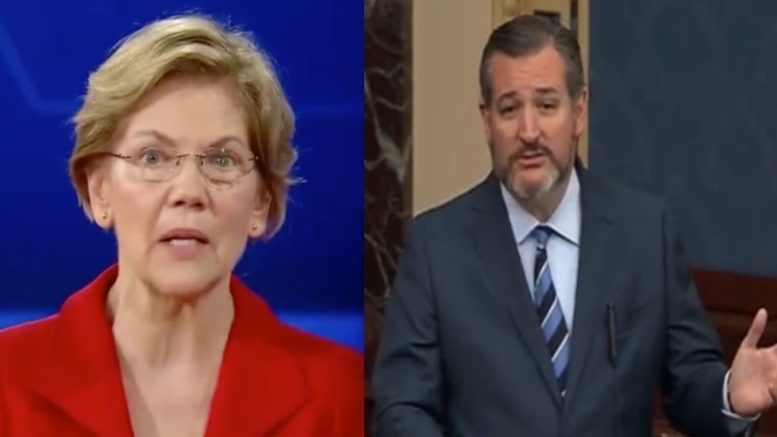 During a CNN Town Hall on Wednesday, Senator Elizabeth Warren (D-MA) told moderator Don Lemon that she was going to introduce a plan to take funds for the Wall and divert it to work on the coronavirus. On Thursday, Warren introduced her bill: Prioritizing Pandemic Prevention Act.

Senator Ted Cruz (R-TX) took to Twitter asking the Massachusets Senator how “open borders would protect us from the potential spread of a worldwide pandemic?”

Don Lemon asked Sen. Warren on Wednesday: “Just tonight, President Trump detailed the administration’s response of the coronavirus, and I want to tell you what it includes. It includes stopping non-U.S. citizens from coming to the U.S. from China, screening people coming into the country from infected areas, guaranteeing those infected and developing a vaccine. Do you think that response is sufficient, Senator?” to which she replied “No.”

“Let’s start because this really is serious, and we really have a lot to talk about here,” Senator Elizabeth Warren said. “We know that with any virus develops, the most vulnerable will be our children, seniors, people with compromised immune systems that are undergoing treatment.”

“So this one is tough,” she continued. “The way I think about this is first we think about allocation, kind of our overall approach. I’m gonna be introducing a plan tomorrow to take every dime that the president is now spending on his racist Wall at our southern border and divert it to work on the coronavirus.“[Emphasis added].

Senator Warren had also tweeted on Wednesday: “Tomorrow, I’m introducing a plan that takes every dime Donald Trump is spending on his wall, and diverting it to fighting the coronavirus. #CNNTownHall” (Continued Below)

Senator Ted Cruz responded by asking Warren on Twitter Thursday: “How exactly would open borders protect us from the potential spread of a worldwide pandemic?” [Emphasis added].

Warren introduced the Prioritizing Pandemic Prevention Act on Thursday to require that approximately $10 billion be redirected from fence projects along the U.S.-Mexico border to the Department of Health and Human Services and U.S. Agency for International Development to make up for the money Congress will spend preparing for and responding to the virus.

“The coronavirus outbreak poses serious health, diplomatic, and economic threats to the United States, and we must be prepared to confront it head-on,” Warren said in a statement. “Rather than use taxpayer dollars to pay for a monument to hate and division, my bill will help ensure that the federal government has the resources it needs to adequately respond to this emergency.” (Video Below)

Coronavirus poses a serious health, diplomatic, & economic threat, & we must be prepared to confront it head-on. So I’m introducing a bill to transfer all funding for @realDonaldTrump's racist border wall to @HHSGov & @USAID to combat coronavirus. https://t.co/8IEhBWRjeL pic.twitter.com/9oAF0A2lGT

"'I'm going to be introducing a plan tomorrow to take every dime that the President is now spending on his racist wall at our southern border and divert it to work on the coronavirus," Elizabeth Warren says #CNNTownHall pic.twitter.com/I3WTbNlBzV

How exactly would open borders protect us from the potential spread of a worldwide pandemic? https://t.co/bzUrvt1g6Y

As we continue to learn more about the #coronavirus, next week I'll hold a hearing in the @SenateCommerce Subcommittee on Aviation and Space to examine the role air travel plays in both spreading & containing the disease & steps Congress can take to protect lives.