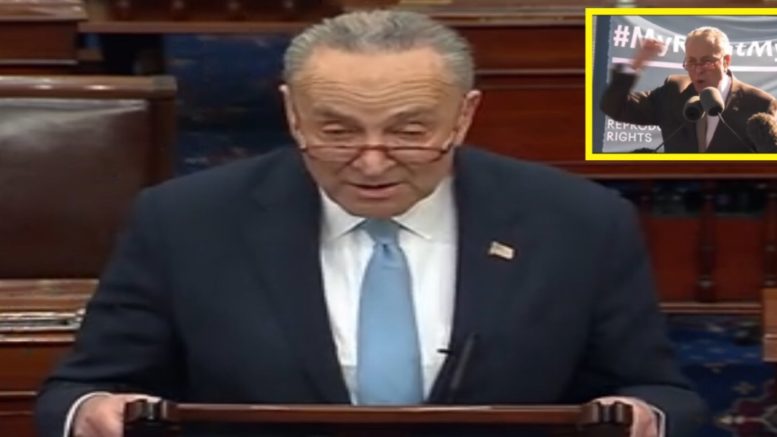 During a rally on Wednesday outside the U.S. Supreme Court, Senate minority leader Chuck Schumer (D-NY) appeared to threaten Supreme Court Justices Neil Gorsuch and Brett Kavanaugh that they “will pay the price”, while he spoke to activists and rallygoers.

At the rally hosted by the Center for Reproductive Rights, Schumer noted that the case, June Medical Services LLC v. Russo, is the first “major” abortion case since President Trump’s court picks have been on the bench. The dispute, dealing with restrictions over who can perform abortions, involves a Louisiana law similar to one in Texas that the court ruled unconstitutional in 2016, before either Trump justice was on the Supreme Court and before conservatives held a 5-4 majority, as reported by Fox News

Chief Justice John Roberts rebuked Schumer for the remarks, saying that “threatening statements of this sort from the highest levels of government are not only inappropriate, they are dangerous,” and that the justices “will continue to do their job, without fear or favor, from whatever quarter.”

After facing much backlash, the Senate Minority Leader said on Thursday: “I’m from Brooklyn, we speak in strong language. I shouldn’t have used the words I did.”

Schumer emphasized he “feels so passionately” about the issue of a woman’s right to choose, adding: “I feel so deeply the anger of women all across America about Senate Republicans in the courts, working hand and glove to take down Roe v Wade.” (Continued Below)

“Now I should not have used the words I used yesterday. They didn’t come out the way I intended to. My point was that there would be political consequences for President Trump and Senate Republicans,” Schumer claimed. (Video Below)

“Of course, I didn’t intend to suggest anything other than political and public opinion consequences for the Supreme Court. And it is a gross distortion to imply otherwise. I’m from Brooklyn, we speak in strong language. I shouldn’t have used the words I did, but in no way was I making a threat. I never, never would do such a thing,” the New York Democrat insisted.

“And Leader McConnell knows that and Republicans who are busy manufacturing outrage over these comments know that too. Now what will remain after the clammer of my comments dies down, is the issue at hand: a woman’s constitutional right to choose and Republican attempts to invalidate it,” he said.