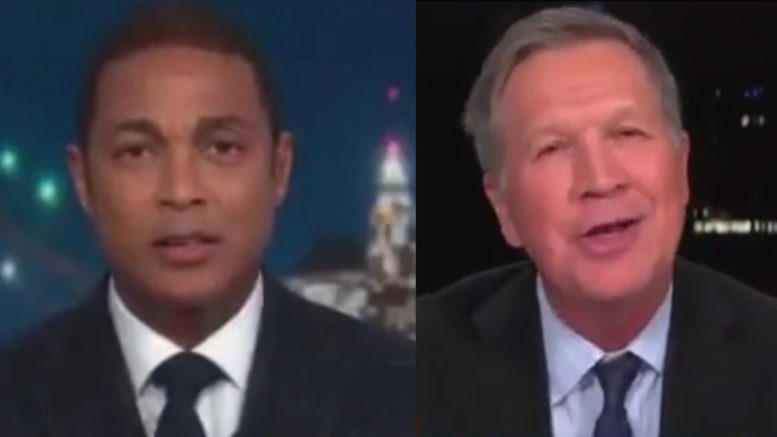 CNN’s Don Lemon and former Ohio Governor John Kasich got into a heated spat while discussing President Trump’s national address in regards to the coronavirus.

Lemon put Kasich on the spot as the CNN host was highly critical of President Trump over clarifications he made during his address. But Kasich refused to agree with any of Lemon’s notions, and instead, spoke highly of the President’s speech, which he thought was “fine.”

It all started as Lemon suggested Trump “didn’t do a good job” to “calm people’s fears,” and he questioned why Kasich is “tiptoeing around” and not being critical of Trump’s address.

As Kasich tried to give his side to the matter, Lemon interrupted.

“Can I finish now?!” Kasich asked. Lemon replied, “No, you can’t John!” and accused Kasich of trying to deflect on to other subjects.

Kasich continued anyway and said, “[Trump] put this thing out because there was some confusion there. This is a very tough time…I’m trying to say to you, Don, we’re trying to move down the road. Looking back doesn’t get things fixed.” Video Below

“Look, I thought he did fine. That’s what I thought. I thought he had the right tone and he no longer played around with ‘We’re gonna blame Democrats’… I hope he’s trying to move forward cause he understands the seriousness of this situation. Now, the fact that they clarified — it isn’t unusual in a speech for somebody to clarify something, okay. But I don’t think that the tone he showed tonight takes away from some clarification. I think he set a serious tone. That’s what I wanted out of him for a long time, and I think we got it.”

An annoyed Don Lemon replied, “I could be serious and sit here and tell you, ‘Four plus four equals 85.'” Video Below