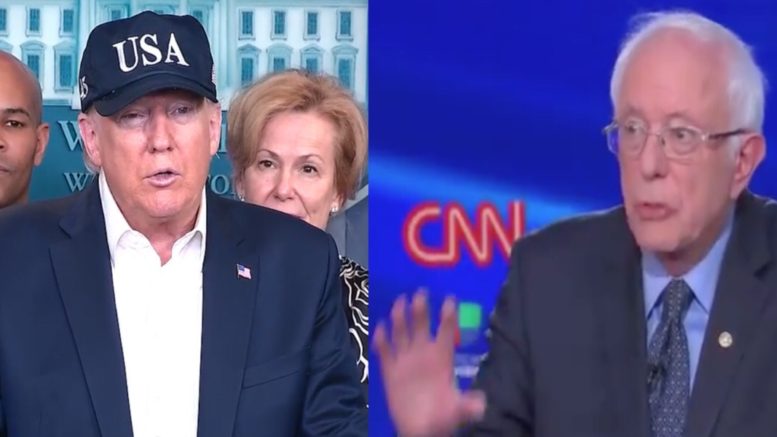 During Sunday nights CNN debate, Democratic presidential candidate, Senator Bernie Sanders (I-VT), was asked what he would do to “save American lives” amid the coronavirus pandemic and took a jab at President Donald Trump.

“If you were president right now, what’s the most important thing you would do tonight to try to save American lives?” CNN moderator Jake Tapper asked Sanders.

“Well, the first thing we have got to do, whether or not I’m president, is to shut this president up right now,” Bernie Sanders suggested.

He claimed that President Donald Trump is “undermining the doctors and the scientists who are trying to help the American people.”

“It is unacceptable for him to be blabbering with unfactual information, which is confusing to the general public,” Sanders alleged.

Sanders did acknowledge that President Trump called a “national emergency”, saying he was “glad”, adding: “What we have got to do is move aggressively to make sure that every person in this country finally understands that when they get sick with the coronavirus, that all payments will be made.” (Continued Below)

“I obviously believe in medicare for all. I will fight for that as president. But right now in this emergency, I want every person in this country to understand when you get sick, you go to the doctor. When you get sick, if you have the virus, that will paid for. Do not worry about the cost right now, because we are in the middle of a national emergency,” Sanders said.

“Second of all, we have to make sure our hospitals have the ventilators they need, … the ICU units that they need. Right now we have a lack of medical personal and I worry very much that if there is a peak, whether we have the capability of dealing with 100’s of thousands of people who may be in hospitals,” he added. (Video Below)

“So we need unprecedented action right now to deal with the unprecedented crisis. And bottom line from an economic point of view, what we have got to say to the American people: if you lose your job, you will be made whole, you’re not gonna lose income. If the fed can put a trillion and half into the banking system, we can protect the wages of every worker in America,” Sanders said.

Tapper: “What’s the most important thing you would do tonight to try to save American lives?”