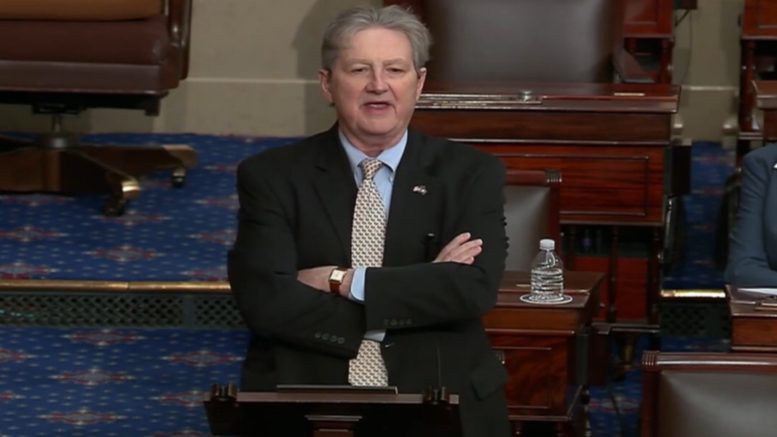 Senator John Kennedy (R-LA) slammed Democrats on the Senate floor Monday for blocking the coronavirus stimulus package, after days of negotiations that failed to yield a deal.

“You know what the American people are thinking right now? They’re thinking that the brain is an amazing organ. It starts working in a mother’s womb and it doesn’t stop working until you get elected to Congress,” the Louisianna Senator said.

“You know what the American people are thinking right now? They’re thinking that country was founded by geniuses, but it’s being run by a bunch of idiots,” Senator Kennedy continued.

“You know what the American people are thinking right now?” he asked again. “They’re thinking why do the members of the United States Senate continue to double down on stupid? Now, this is not a Republican bill … this is a bipartisan bill.”

The Louisianna Senator noted the members spent “hours and hours and hours” negotiating the provisions, declaring, “This is not a slush fund! This is a bill to help people and businesses in America.”

“This bill is going to increase unemployment insurance, … send 1,200 dollars to every man and woman in America, taxpayers who make less than 75,000 dollars a year, and 500 dollars for each of their children. This bill is gonna help every small business in this country. It’s not a bail-out. It provides up to 350 billion dollars for small businesses, for the next 8 weeks to keep going,” he explained. (Continued Below)

“What are we going to leave to our children if we allow this economy to crash? And it is happening as we speak. I mean, no ill will for my Democratic friends,” he said. “I like and respect every one of them. But let’s pass this bill,” he urged. (Video Below)

Democrats blocked Republican efforts to advance the massive stimulus bill for the second day in a row on Monday afternoon on a 49-46 vote. It needed 60 votes to advance.

What are we going to leave to our children if Democrats allow this economy to crash?

He also tweeted on Monday:

Democrats are holding funding for hospitals & salaries for workers hostage while they try to resurrect the Green New Deal.

Our priority should be people, but today Democrats are playing vampire politics—sucking hope & help from Americans who need it now more than ever.