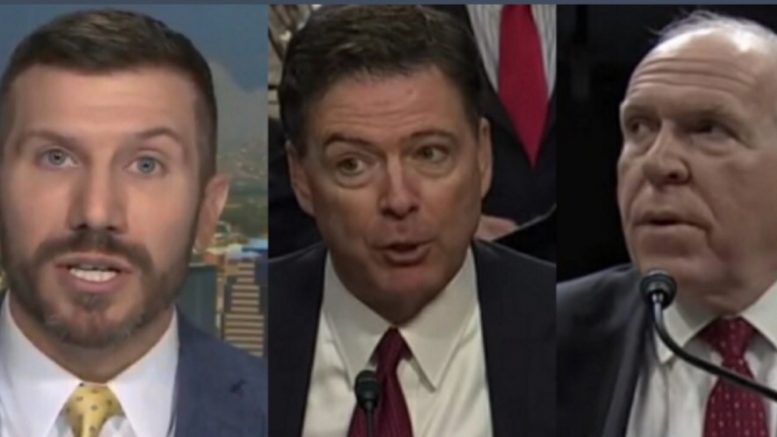 While appearing on Saturday’s airing of Fox & Friends, former CIA operative Bryan Dean Wright implied that the “death penalty” would be an appropriate punishment for James Comey, John Brennan and other bureaucrats if prosecuted and found guilty of committing treacherous acts.

During his analysis, Wright, who is also a Democrat voter, laid out “horrifying” steps Comey and other senior level officials took to remove General Michael Flynn, and attempted to do the same to President Trump.

Related Article: Barr On Durham’s Probe: “We’re Not Dealing With Just Mistakes & Sloppiness — There Was Something Far More Troubling”

Wright determined, “We have this very clear case of James Comey and a whole bunch of other folks on the senior level of the FBI trying to get people fired — not because the facts warranted or the law called for it, but because [of] their own personal partisan bias.”

“What do you think, if anything, should happen to James Comey?” Fox host Jillian Mele asked. “What’s your opinion on that?”

Wright responded by voicing his hope that Attorney General Barr and John Durham can “prove their case” and “prosecute people like the James Comeys”, including former CIA Director John Brennan. And if so, those who are found guilty should get the “most extreme form of punishment.” Video Below

“My preference, I’d love to see the death penalty,” Wright said. “And boy oh boy, I tell you if I could flip the switch myself, I’d do it because these men are traitors.”

“They assaulted not just the Trump Administration, but your vote, my vote and anybody who went to he ballot box in 2016,” he added.

“Irrespective of who we voted for, they decided that they were going to choose the political winners and losers,” Wright concluded. “That’s what offends me and, I think, outrages most people watching this program.” Video Below

Later on, Wright tweeted, “If AG Barr & Durham have evidence against Comey & Co for treachery in 2016/2017, I want them prosecuted. And if they’re found guilty, I want them to face the death penalty.”

“Lawlessness of the kind we’ve seen must be met w/ a deterrent so horrible that it won’t happen again,” he declared.