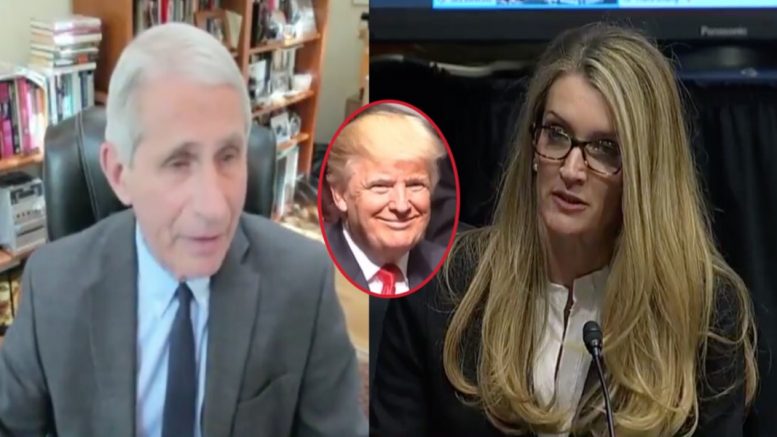 Tuesday during a Senate Health Committee hearing, Senator Kelly Loeffler (R-GA) asked the director of the National Institute of Allergy and Infectious Diseases, Dr. Anthony Fauci, over whether he has a “confrontational relationship” with the Commander in Chief.

Director Robert Redfield, Food and Drug Administration (FDA) Commissioner Stephen Hahn and Assistant Secretary for Health Brett Giroir of the Department of Health and Human Services also commented on their relationship with the president during the coronavirus crisis.

“The mainstream media and indeed some of my colleagues in the Senate, seem to want to paint each of your relationships with our president during this wartime effort as confrontational and lacking consciences. Can you categorically say here to the American people here today whether this is true or untrue?” Senator Loeffler asked.

“No, there is certainly not a confrontational relationship between me and the president,” Dr. Fauci stated.

“As I have said many times, I give advice and opinion based on evidence-based on scientific information. He hears that. He respects it. He gives opinions from a variety of other people,” he continued.

“But in no way in my experience over the last several months has there been any confrontational relationship between us,” he reiterated. Continued Below

Senator Loeffler tweeted a video of her question to Dr. Fauci and wrote: “Here’s the unequivocal truth from Dr. Fauci himself. There is NO confrontational relationship with @realDonaldTrump. He and @POTUS are working together every day to guide us through this fight and save American lives.”

In March, Fauci said the media should stop “pitting” him against Trump when questioned on whether he thinks the media is trying to highlight differences between his advice on the coronavirus pandemic and Trump’s opinions, The Hill reported.

“That is really unfortunate,” Fauci said at the time. “I would wish that would stop because we have a much bigger problem here than trying to point out differences. There really, fundamentally, at the core … are not differences.” Video Below

Dr. Anthony Fauci to @SenatorLoeffler: "There is certainly not a confrontational relationship between me and the president."

Here’s the unequivocal truth from Dr. Fauci himself. There is NO confrontational relationship with @realDonaldTrump.

He and @POTUS are working together every day to guide us through this fight and save American lives. https://t.co/FVrs42E6VF