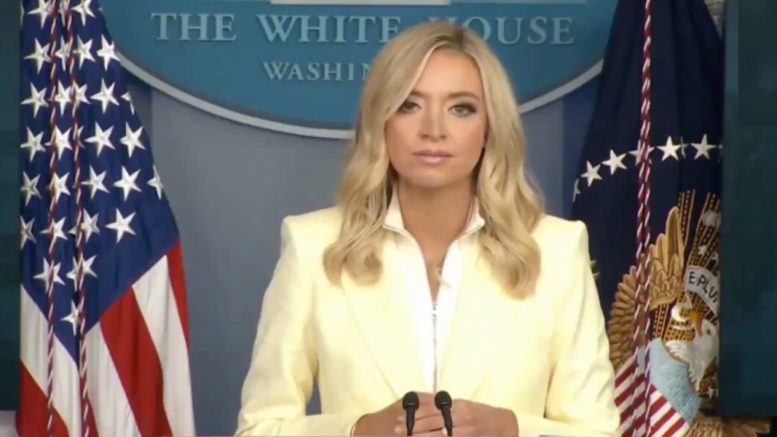 McEnany brought visual aids to assist the White House Press corps in what questions she deemed they should be asking Barack Hussein Obama’s spokesperson, saying, “any good journalist” would want to see the questions answered.

This comes after Kayleigh McEnany, last week, had called out reporters for their “lack of journalistic curiosity” in what the Trump administration believes to be a miscarriage of justice in the criminal case surrounding General Michael Flynn.

She told reporters at the time, “That is, after all, the job of reporters, to answer the very questions that I’ve laid out, and I hope you guys will take the time to do it.”

Following up on her questions she had proposed to the press last week, McEnany told reporters Friday: “I laid out a series of questions that any good journalist would want to know about why people were unmasked.”

“Did anyone pose any questions about Michael Flynn and unmasking to [former] President Obama’s spokesperson?” McEnany asked, looking around the briefing room for a raised hand. “Oh, not a single journalist has posed that question?” Continued Below

The White House press secretary then proceeded to tell reporters that she “would like to lay out a series of questions, and perhaps if I write them out in slide format, maybe we’re visual learners, and you guys will follow up with journalistic curiosity”.

She put up a slide show of the questions for the reporters to answer over their three day weekend.

“It’s a long weekend,” the White House press secretary said. “You guys have three days to follow up on those questions, and I certainly hope the next time I ask, some hands go up. Because Obama’s spokesperson should be asked those questions because President Trump’s spokespeople certainly would be.” Video Below

This is the greatest takedown of the Media I’ve ever seen.
🤣🤣🤣🔥🔥🔥 pic.twitter.com/bmKAH6xZf8

White House press secretary Kayleigh McEnany point-blank asked all the journalist at the press conference if they had contacted Obama‘s press secretary about the unmasking of general Flynn.

Kayleigh then confronted media with questions.

On Wednesday, McEnany laid out the case, in which she explained Susan Rice mislead the public in 2017 when she claimed to “know nothing” about the Flynn unmaskings. McEnany also noted how bizarre it was for Rice to write an email to herself and how the Obama administration did things “by the book”.

.@PressSec calls out Susan Rice for her lies surrounding the Flynn Unmasking and for Emailing herself on Inauguration day emphasizing that they did things "By the Book" pic.twitter.com/kRflPgiNyG

"[Trump] and the people around him may have been caught up in surveillance of foreign individuals and their identities may have been disclosed. Do you know anything about this?"

Susan Rice: "I know nothing about this." pic.twitter.com/ajkvGMfG3b