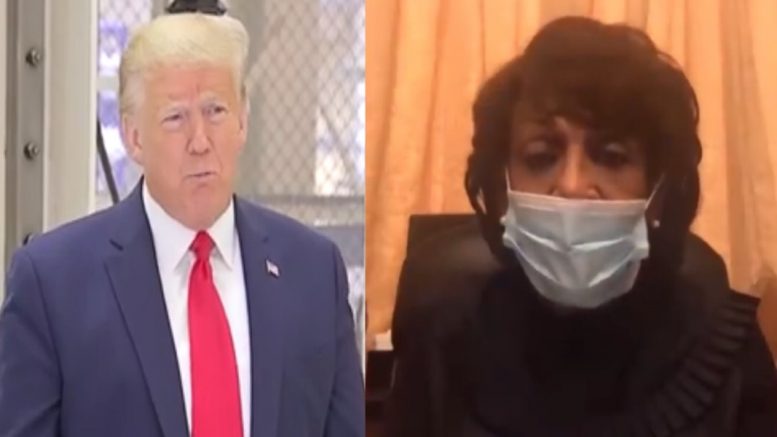 On Thursday, Rep. Maxine Waters (D-CA) claimed in an interview with TMZ, that President Donald Trump’s “dog whistling” and “white supremacists” contributed to the death of George Floyd after his arrest by Minneapolis police.

Waters said that when she had learned of Floyd’s death: “My first thought was not again, not one more killing. And I’m reflecting on all of the killings of young black men in particular, but of course black women too, at the hands of the police and at the hands of, you know, these white supremacists.”

“I’m thinking about the way that the president conducts himself, in a way he’s dog whistling, and I think that they’re feeling that they can get away with this kind of treatment,” Rep. Waters alleged.  “And I’m just so sorry about the loss of another life.”

She continued by suggesting that the police officer “who had his knee on his neck enjoyed doing what he was doing. And I believe sometimes some of these officers leave their home thinking ‘I’m gonna get me one today. And I think this is his one that he got today. And he didn’t care if anyone was photographing him.”

The congresswoman also said those involved in the incident were aware of the video cameras recording the event, and they they “stood there and watched him– are just as guilty as he is, and I’m glad that all of them were fired.”

On Wednesday, the Commander in Chief took to Twitter to say: “At my request, the FBI and the Department of Justice are already well into an investigation as to the very sad and tragic death in Minnesota of George Floyd.”

“I have asked for this investigation to be expedited and greatly appreciate all of the work done by local law enforcement,” he continued.

“My heart goes out to George’s family and friends. Justice will be served!” Video Below

….I have asked for this investigation to be expedited and greatly appreciate all of the work done by local law enforcement. My heart goes out to George’s family and friends. Justice will be served!

Meanwhile on Thursday, White House press secretary Kayleigh McEnany said the President was “very upset” over the tape, that showed the death of George Floyd.

President @realDonaldTrump has ordered the FBI to expedite its investigation into the death of George Floyd. pic.twitter.com/7ktVS3fbdZ