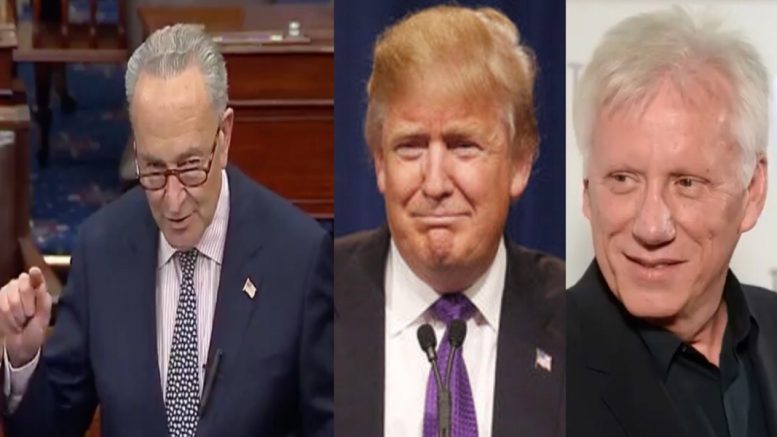 President Donald Trump took to Twitter Thursday, slamming “mail-in-voting” and questioned whether we should “delay the election until people can properly, securely and safely vote”, amid the novel coronavirus pandemic.

Can’t wait to watch heads explode on this one. Troll Level: Infinite https://t.co/5keSNACp2j

Senator Chuck Schumer vented his frustration on the Senate floor claiming in part: “One again … all he wants to do is divert from his abject failure in the coronavirus crisis.”

“He says, ‘Oh, maybe we won’t have an election’. That’s up to the Senate and the House, Mr. President! President Trump, the election will be in November, on November 3rd, and you will not change it. Stop diverting attention, President Trump!” Schumer declared. “That’s what you’ve done for three months.”

James Woods tweeted a clip of Senator Schumer venting his irritation on the Senate floor, adding: “The very moment a large-mouth bass takes the bait!”

The very moment a large-mouth bass takes the bait! pic.twitter.com/9Gk6YA8Cos

It should be noted that the president has no authority to determine when the general election takes place. The Constitution expressly grants that power to Congress, which could delay the voting with approval from both chambers, yet that has never happened, the Daily Caller reported.

During a White House coronavirus briefing Thursday, the president explained that vote-by-mail could lead to having to “wait” for the elections results, if mail-in-voting is allowed.

Trump on delaying 2020 election: “I don't want to have to wait for 3 months and then find out the ballots are all missing and the election doesn't mean anything. That is what is going to happen."

It will be the “most rigged election in history” if mail-in voting is allowed. pic.twitter.com/zFKDesv53T

(Related: Gov. Newsom Signs Executive Order Allowing All Californians To Vote By Mail, James Woods Reacts: “Why We Have The Electoral College”)