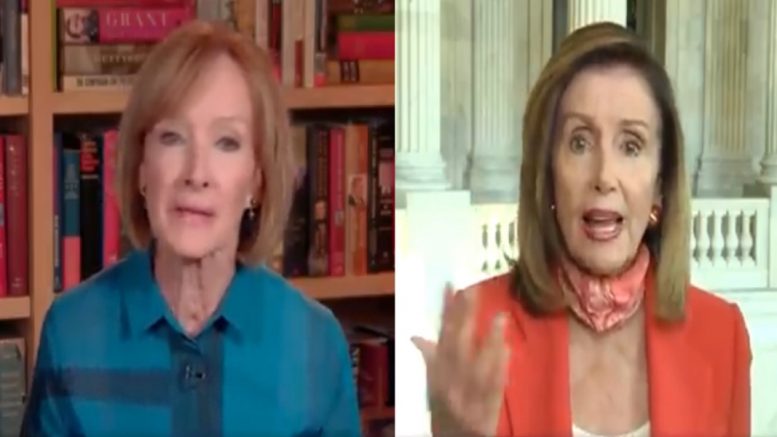 During an interview Tuesday on PBS Newshour, Nancy Pelosi (D-CA) snapped on journalist Judy Woodruff when the House Speaker was pressed over remaining stimulus funds, which could potentially be used, amid negotiations between lawmakers regarding another economic aid package.

Woodruff told Pelosi that Republicans are “now showing flexibility in money for states and local governments” adding: “This is a difference. Democrats want more money, Republicans want a lot less”.

Woodruff continued: “[Republicans] are saying they are willing to show flexibility, and they’re also saying a lot of the money passed in the spring, Speaker, has not even been spent yet.”

Nancy Pelosi immediately snapped on the PBS Newshour journalist for daring to ask, what seemed as, a legitimate question.

Woodruff told Pelosi she was playing the “devils advocate” and said that she “wanted to ask” her “position” over the funding, which prompted Pelosi to say, “No, you aren’t.” Video Below

Watch the heated exchange between Nancy Pelosi and Judy Woodruff:

Pelosi flips out at Judy Woodruff here because Woodruff isn't trying to bury the evidence that Democrats are purposely obstructing the stimulus bill because they'd rather see Republicans take a loss than see people receive relief: pic.twitter.com/vUmAedWKCO

Pelosi went on to tell Woodruff that Democrats passed the HEROES Act in May, a $3 trillion coronavirus stimulus package, and she named off some of the items in the bill.

What she didn’t tell Woodruff during the interview is that the HEROES Act would allow those who use taxpayer-identification numbers to be eligible for direct cash assistance, paving the way for illegal aliens, who don’t have Social Security numbers, to be eligible for $1,200 stimulus checks.

House Republicans, however, introduced an amendment that would have prevented illegal aliens from receiving the stimulus checks, but Democratic lawmakers shot it down before passing the bill. The legislation also calls on Immigration and Customs Enforcement (ICE) to reduce its detainee population and bars the administration from withholding federal grant money from localities that refuse cooperation with federal immigration authorities, per Daily Caller. Continued Below