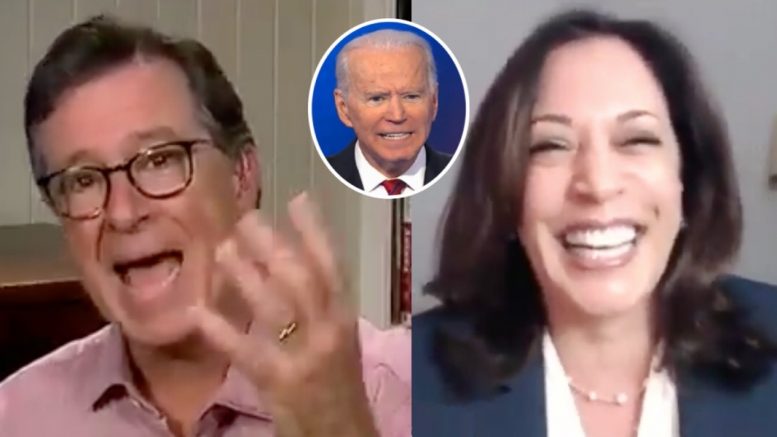 In June, Senator Kamala Harris (D-CA) was pressed by Stephen Colbert over remarks she had made to former Vice President Joe Biden during a June 2019 debate, in which she called out Biden on the issue of race, saying the way he recently described his past working relationship with two segregationist lawmakers was “hurtful.”

Harris also accused Biden of opposing busing, which Biden disputed. “There was a little girl in California who was part of the second class to integrate her public schools, and she was bused to school every day, and that little girl was me,” she said.

Kamala Harris followed up after the debate by posting a photo of herself as a child on Twitter:

There was a little girl in California who was bussed to school. That little girl was me. #DemDebate pic.twitter.com/XKm2xP1MDH

“From an outsider who doesn’t really know both of you very well, your relationship seems like a good one now. It really does bring home the old phrase, ‘Politics makes lets say, for a strange partnerships’. Because in those debates, you landed haymakers on Joe Biden. I mean his teeth were like chicklets all over the stage. And now, I believe that you’re fully supportive of him. How does that transition happen? How do you go from being such a passionate opponent on such bedrock principles for you, and now, you guys seem to be pals?” Stephen Colbert asked Harris.

Senator Harris laughed it off by telling Colbert, “It was a debate”, which prompted Colbert to say, “Not everyone landed punches like you though.”

“It was a debate,” she reiterated while chuckling. Video Below

“So you don’t mean it?” Colbert followed up.

“The whole reason– literally, it was a debate. It’s called a debate. There were journalists there covering the debate. … I am 1000% supportive of Joe Biden,” Harris claimed.

Kamala Harris basically accused Joe Biden of being a racist during the debates and her only defense is “it was a debate”.

So did you never think he was racist and knowingly falsely accused him of being one or are you now just ok with being on a ticket with a racist? pic.twitter.com/0axLvxtf9Z

(Related: Kamala Calls On Kavanaugh To Be Impeached Because He ‘Lied’, Fitton Fires Back: ‘I Saw You Smear An Innocent Man’)