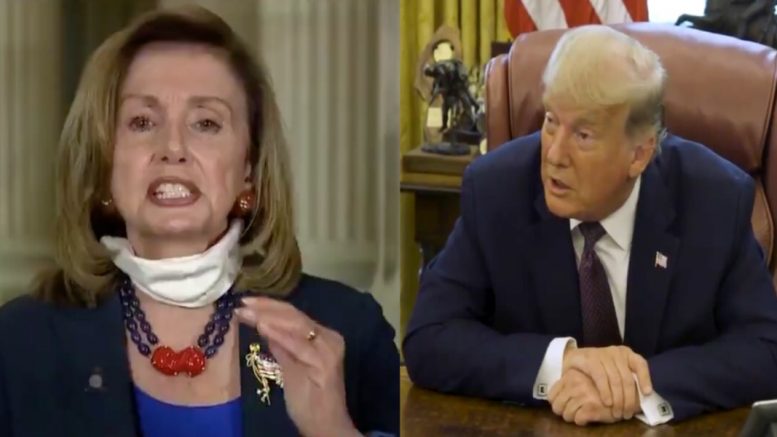 During a Friday interview with CNN’s Wolf Blitzer, House Speaker Nancy Pelosi (D-CA) vented her frustration when responding to the news that President Trump secured another historic peace deal in the Middle East, calling it a “distraction”.

The Commander in Chief announced on Twitter Friday, “Another HISTORIC breakthrough today! Our two GREAT friends Israel and the Kingdom of Bahrain agree to a Peace Deal – the second Arab country to make peace with Israel in 30 days!”

President Donald Trump also released a “joint statement of the United States, the Kingdom of Bahrain, and the State of Israel”.

Joint Statement of the United States, the Kingdom of Bahrain, and the State of Israel pic.twitter.com/xMquRkGtpM

“How much credit do you give the President of the United States for these peace agreements?” Wolf Blitzer directly asked Nancy Pelosi on Friday.

Nancy Pelosi’s remarks over the Peace Deals begin at the 6:30 mark in the video:

Speaker of the House Nancy Pelosi tells @wolfblitzer she isn't speaking with Pres. Trump about stimulus negotiations because "there's no validity to whatever he says," but adds that she remains optimistic congressional Republicans and Democrats may yet reach a compromise. pic.twitter.com/c0oXTwa7gF

President Trump has been recently nominated twice for a Nobel Peace Prize because of his efforts in securing these peace deals. According to the New York Post, Trump “has been nominated for the Nobel Peace Prize for a second time this week — this time for brokering a historic peace deal between Serbia and breakaway republic Kosovo… The deal came on the heels of another agreement brokered a peace deal between Israel and the United Arab Emirates — the first normalization of relations between Israel and an Arab nation in decades,” Kerry Picket reported. Continued Below

We leave you with President Trump’s remarks announcing that Bahrain agreed to normalize relations with Israel:

(Related: Pelosi Claims It Was A ‘Set Up’ Getting Caught Having Her Hair Blown Out In A San Francisco Salon)