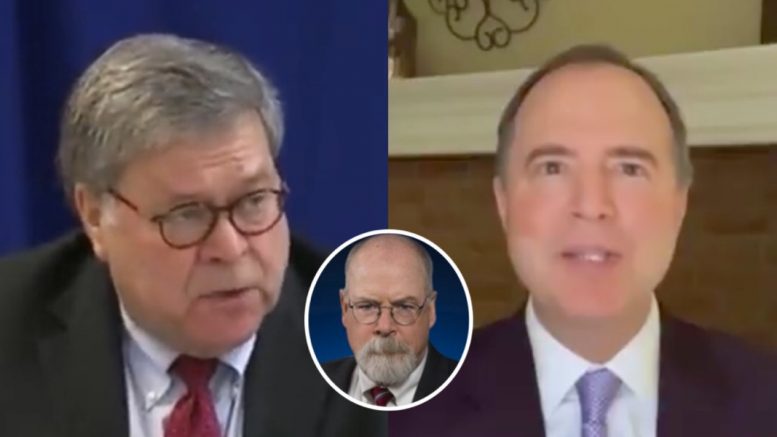 Attorney General William Barr has reportedly given extra protection to U.S. Attorney John Durham, the prosecutor he appointed to investigate the origins of the Trump-Russia probe, giving Durham the authority of a special counsel to complete his work without the risk of easily being fired, as previously reported by Swamp Drain.

Barr told The Associated Press on Tuesday that he had appointed U.S. Attorney John Durham as a special counsel in October under the same federal statute that governed special counsel Robert Mueller in the original Russia probe. He said Durham’s investigation has been narrowing to focus more on the conduct of FBI agents who worked on the Russia investigation, known as Crossfire Hurricane, as first reported by AP.

Attorney General William Barr told the AP on Tuesday, “I decided the best thing to do would be to appoint them under the same regulation that covered Bob Muller, to provide Durham and his team some assurance that they’d be able to complete their work regardless of the outcome of the election.”

The current investigation, a criminal probe, had begun very broadly but has since “narrowed considerably” and now “really is focused on the activities of the crossfire hurricane investigation within the FBI,” Barr said. He said he expects Durham would detail whether any additional prosecutions will be brought and make public a report of the investigation’s findings.

In a scope order, Barr stated that Durham as special counsel “is authorized to investigate whether any federal official, employee, or any other person or entity violated the law in connection with the intelligence, counter-intelligence, or law-enforcement activities directed at the 2016 presidential campaigns, individuals associated with those campaigns, and individuals associated with the administration of President Donald J. Trump, including but not limited to Crossfire Hurricane and the investigation of Special Counsel Robert S. Mueller, III.”

Following the news of John Durham, Rep. Adam Schiff (D-CA) suggested Barr’s appointed special counsel should be rescinded by the next attorney general. Continue Below

“Barr didn’t feel it was necessary that he had some special counsel status in the past. I think it’s pretty clear the only reason he wanted to confirm that status now is a desire to continue the investigation after he’s gone– that is after Barr is gone,” Schiff said during a Tuesday interview on MSNBC.

“But as the appointment appears politically motivated as it appears to be based on a faulty premise in the sense of statute, which it’s based, it’s inconsistent with that statue,” Schiff claimed without providing details.

Schiff also alleged that Durham’s investigation “was tainted from the beginning” and “not based on any evidence”, adding, “But on the basis of Bill Barr’s desire to placate the president. The president wanted his political enemies investigated. He wanted the investigation of his conduct and misconduct itself investigated and Barr was willing to oblige”.

Adam Schiff refuses to accept the possibility that John Durham finds something damning, simply saying the probe has been "tainted from the beginning," and repeats how Biden's AG can consider rescinding the appointment because it's "not consistent" with the special counsel statute pic.twitter.com/mhMrGVANui

Schiff says: "Barr is using the special counsel law for a purpose it was not intended: to continue a politically motivated investigation long after Barr leaves office."