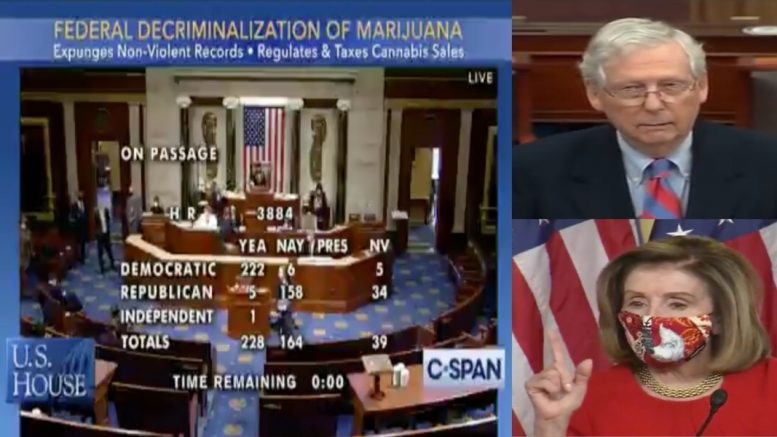 House Speaker Nancy Pelosi (D-CA) said on Friday that she would accept a coronavirus stimulus package after months of stalled negotiations.

Pelosi, who has held out on a deal for around six months, claimed at a Friday press conference that now that Joe Biden is reportedly President-elect, she is willing to do a smaller deal.

“That is a total game-changer: a new president and a vaccine. It’s for a shorter period of time, but that’s okay now, because we have a new president,” Nancy Pelosi alleged, though she did not give any credit to President Trump for Operation Warp Speed.

Nancy Pelosi says she is willing to do a smaller covid-19 deal citing the "game changer" of Biden's election and vaccine development:

"That's OK now because we have a new president. A president who recognizes that we need to depend on science…" pic.twitter.com/Egk9kxWWJV

Meanwhile, Pelosi “admits it was her ‘decision’ to block coronavirus relief for months”:

Nancy Pelosi admits it was her “decision” to block coronavirus relief for months pic.twitter.com/iHhVFTwrD1

Democrats in the House blocked a Republican-led move to reconsider a coronavirus relief bill Thursday. It was the 40th time Democrats blocked a package of Republican stimulus bills from passing the House, as reported by Daily Caller.

“They’re picking weed over the workers. They’re picking marijuana over the much-needed money we need to go forward, the small businesses that are closing,” McCarthy added. “I don’t understand the double standards of what we see from these Democratic leaders.” Continued Below

Meanwhile, the House on Friday passed sweeping legislation that would decriminalize marijuana at the federal level, the first time either chamber of Congress has voted to decriminalize cannabis. The measure, the Marijuana Opportunity Reinvestment and Expungement Act, passed on a largely party-line vote of 228 to 164, The Hill reported.

Senate Republicans reacted after the House voted to legalize marijuana on Twitter Friday, writing, “Nancy Pelosi’s House Democrats just voted to legalize pot. Now they are going home. No covid relief. No vaccine funding. No help for small business. This is really starting to get old.”

Now they are going home.

No help for small business.

This is really starting to get old. pic.twitter.com/pW7UmtKxnE

The Marijuana Opportunity Reinvestment and Expungement (MORE) Act, introduced by Senator Kamala Harris in 2019, would remove marijuana from the schedule of controlled substances under the Controlled Substances Act and eliminate criminal charges for anyone who “manufactures, distributes, or possesses marijuana”, Daily Caller reported.

In September, Democrats in the House introduced coronavirus stimulus legislation which includes the word “cannabis” 68 times, which is more than the word “job” or “jobs” by double digits.

I hope Democrats will finally let us get a bipartisan outcome soon.

The story of the 116th Congress under Nancy Pelosi: Legislation by Netflix. #TigerKing #Marijuana

(Related: Wolf Blitzer & Pelosi Get Into A Heated Exchange At End Of Interview: “You’re Not Right On This, Wolf!”)