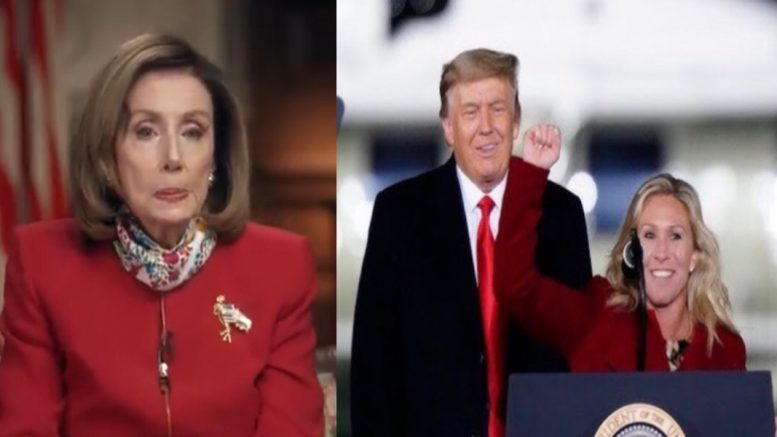 House Democrats on Monday, introduced an impeachment resolution against President Donald Trump for alleged incitement of an insurrection, just days after the Capitol breach, claiming the Commander in Chief “warrants impeachment and trial, removal from office, and disqualification to hold and enjoy any office of honor, trust, or profit under the United States”.

The article also claims that before the Jan. 6 joint session the president addressed a crowd in Washington where he “reiterated false claims that ‘we won this election, and we won it by a landslide,’ and “willfully made statements that, in context, encouraged–and foreseeably resulted in–lawless action at the Capitol.”

The article refers to President Trump’s statement: “If you don’t fight like hell you’re not going to have a country anymore.” Continued Below

“Thus incited by President Trump, members of the crowd he had addressed, in an attempt to, among other objectives, interfere with the Joint Session’s solemn constitutional duty to certify the results of the 2020 presidential election, unlawfully breached and vandalized the Capitol, injured and killed law enforcement personnel, menaced Members of Congress, the Vice President and Congressional personnel, and engaged in other violent, deadly, destructive, and seditious acts,” the Democrats’ article states.

The article also claims that President Trump’s conduct “followed his prior efforts to subvert and obstruct the certification of the 2020 Presidential election,” referring to his phone call earlier this month with Georgia Secretary of State Brad Raffensperger, where he pressured him to “find” enough votes to overturn the state’s election results.

“In all this, President Trump gravely endangered the security of the United States and its institutions of Government,” the article states. “He threatened the integrity of the democratic system, interfered with the peaceful transition of power, and imperiled a coequal branch of Government.” Continued Below

The article adds that he “betrayed his trust as President, to the manifest injury of the people of the United States.”

“Donald John Trump thus warrants impeachment and trial, removal from office, and disqualification to hold and enjoy any office of honor, trust, or profit under the United States,” it said.

Last week when President Donald Trump spoke to supporters in Washington, D.C., he said in part, “I know that everyone here will soon be marching over to the Capitol building to peacefully and patriotically make your voices heard”.

Rep. Marjorie Taylor Greene (R-GA) tweeted the video of the president’s remarks from the rally, and also wrote, “PEACEFULLY & PATRIOTICALLY march to the Capitol”.

“This does not fall under treason, bribery, or other high crimes and misdemeanors. No matter how much @SpeakerPelosi hates President Trump. Truth matters,” she said.

“PEACEFULLY & PATRIOTICALLY march to the Capitol”

This does not fall under treason, bribery, or other high crimes and misdemeanors.

No matter how much @SpeakerPelosi hates President Trump.

The timeline doesn’t fit the narrative.

Trump supporters could not have listened to President Trump’s speech at the WH and then been “incited” by him to walk to and attack the Capitol.

The attack was terrible!

Why was the request for the National Guard denied days before? https://t.co/RS9JnPWymU

In a statement on Sunday, Rep. Greene wrote that Speaker Nancy Pelosi (D-CA) and the Democrats are “pouring salt on the wounds of Trump supporters with another TDS (Trump derangement syndrome) temper tantrum with impeachment and the 25th amendment in the last 10 days”.

…can get elected as Speaker without having to change the House rules and bring in #COVID19 positive members to vote for her.

Who isn’t triggered by gender pronouns and family names.

Who understands her job is to serve the hard working American tax payers.

The left is far more worried about politics and power than the quality of people’s lives.

Congress’s focus should be on #AmericaFirst policies that help our people, NOT on power plays between the two parties.

This country MUST re-open in order…

…fellowship with one another,

and lastly, incomprehensible that the left hates the right so much that they never want to hear our voices again.

I am appalled at the outright hate coming from Democrat leadership in Congress as they pursue impeachment this week.

She added on Monday that she stands “firmly with my President Donald John Trump!”

…only work to consolidate your power that further separates the rich & the poor.

Dems are the party that fund #BLM on their fundraising platform @actblue.

Dems are the hypocrites that call for violence.

The people see through it all.

No amount of censorship will hide truth.

(Related: Pelosi Accuses Trump Of Committing An ‘Unspeakable Assault’ On U.S., Calls For His ‘Immediate Removal’)