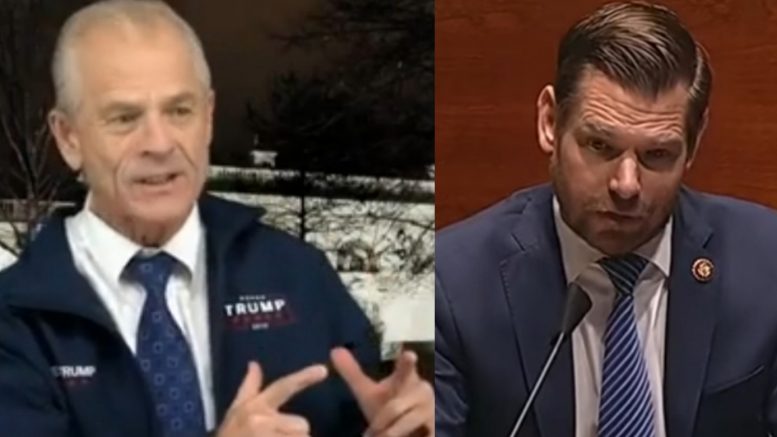 “Just get rid of that guy!” President Trump’s advisor Peter Navarro exclaimed while being asked about Democrat Congressman Eric Swalwell and his ties to an alleged Chinese spy.

A report that was published by Axios in December indicated that alleged spy Christine Fang, or Fang Fang, had ties to a number of political figures including Rep. Swalwell — and had sexual interactions with at least two Midwestern mayors. Swalwell has since repeatedly dodged questions about the extent of his relationship with her.

Mr. Navarro was discussing threats that the Chinese government imposes on America, when Swalwell’s name was brought up on Saturday’s airing of Justice With Judge Jeanine.

“What about people like Eric Swalwell in the government, and how China has tried to influence the legislature?” Judge Jeanine asked.

“Yea, if I could be a little crude, the STD … the Spy Transmitted Disease there in California — I mean she (Fang Fang) not only slept with Swalwell, but she went up and down the coast sleeping with mayors and, I mean…this is the ultimate honey pot. This is what the Chinese do. They try to ensnare you with money and favors.

“That guy (Swalwell) — I am so sick of that guy standing up at the well of Congress, high and mighty and lecturing Donald Trump or anybody else…I mean, come on! Come on! Just get rid of that guy…Come on!” Navarro exclaimed. Video Below

White House Trade Advisor @RealPNavarro discussed how China poses as a potential threat to the United States under the Biden Administration. Listen to hear the points he had to share tonight in regard to this and more. pic.twitter.com/DAXGxwKV7P