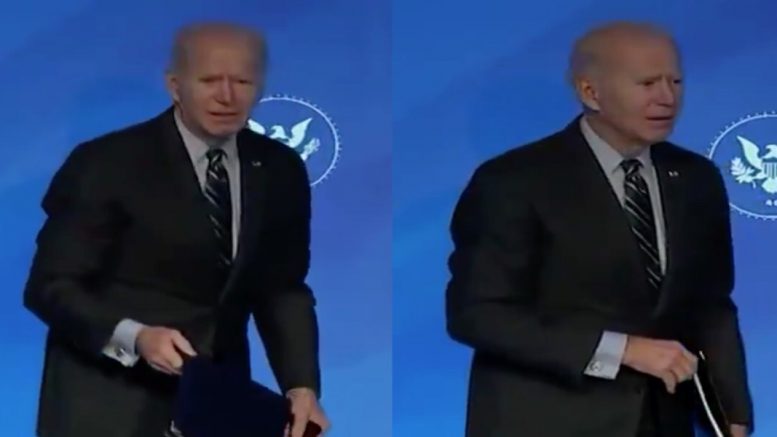 Joe Biden on Saturday, was asked by a reporter about the upcoming inauguration and whether there would “be any scenario you would not be taking the oath outside on Wednesday”?

A seemingly confused 78 year old Biden looked up after picking up what appeared to be a notebook and did not answer the reporter’s question, but instead, remained silent and walked off from his news conference regarding COVID-19 plans.

Anna Khait tweeted on Saturday, “Apparently Biden was just asked by the media if there was a chance he wouldn’t get inaugurated and he didn’t answer … is this true!? Is there a clip! If so.. HA, they know they’re caught. The seed of doubt is strong!”

She later found the clip of the reporter’s question to Biden, where he did not answer her question regarding the possibility of not “taking the oath outside on Wednesday”.

There it is 👀 Lol pic.twitter.com/oVc3IZ82v5

President Donald Trump is reported to leave the White House and Washington, D.C., on Inauguration Day with a departure ceremony at Joint Base Andrews.

Trump had announced on Twitter — just before he was permanently banned from the platform — that he would not be going to Biden’s inauguration. In a tweet on January 8, 2021, President Trump said, “To all of those who have asked, I will not be going to the Inauguration on January 20th.” Continued Below

Some users on Twitter responded to Joe Biden’s seemingly confused actions when another clip circulated online. The video appears to zoom in on Biden and mutes the reporter’s question.

Yikes. If he was a Republican the 25th amendment talk would be trending and rightfully so. pic.twitter.com/ohKjOSdoJI

I saw this live and I was like this dude is a corpse.

If Trump did this they’d never stop complaining

(Related: Rep. Greene: “On January 21, 2021, I’ll Be Filing Articles Of Impeachment Against Joe Biden For Abuse Of Power”)