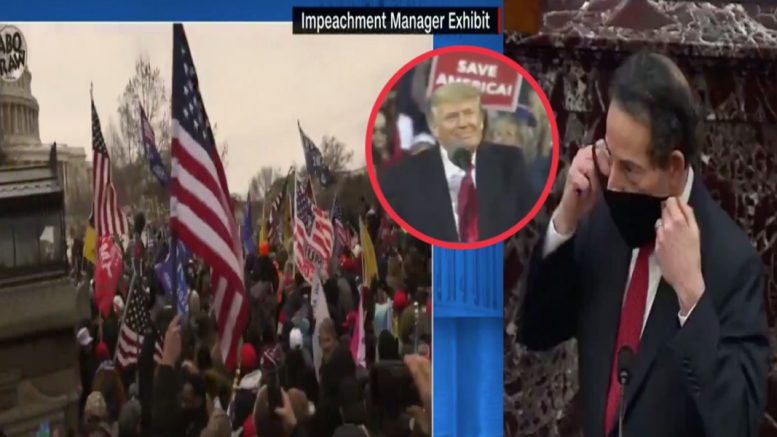 House impeachment manager Jamie Raskin (D-MD) started off the first day of the impeachment trial against the 45th President by presenting an edited video to Senators, which showed protesters storming the the Capitol on January 6.

In his video that he presented before lawmakers, Raskin omitted President Trump specifically telling his supporters to “peacefully and patriotically make your voices heard.”

“Because you’ll never take back our country with weakness. You have to show strength and you have to be strong,” he continued. “We have come to demand that congress do the right thing and only count the electors who have been lawfully slated. Lawfully slated.”

“I know that everyone here will soon be marching over to the Capitol building to peacefully and patriotically make your voices heard,” the 45th President declared.

Raskin, in his opening statement Tuesday, claimed that the Democrats’ case is “based on cold, hard facts”, yet he presented an edited video which left out, quite possibly, President Trump’s strongest key statement to his supporters on January 6 to “peacefully and patriotically make your voices heard”.

Democrats kick off impeachment trial with video of Jan. 6, showing Trump's remarks at the rally followed by the violent and deadly insurrection in the Capitol.
"Senators, the president was impeached by the U.S. House of representatives January 13th for doing that," Raskin says pic.twitter.com/YOA75QXEnc

Former Utah Republican Congressman Jason Chaffetz wondered if the Democrats violated their own rules for impeachment by the use of manipulated media.

Page 34 of the Rules of the House of Representatives, states: “DISSEMINATION OF MANIPULATED MEDIA. — The Committee on Ethics is directed to report to the House, not later than December 31, 2021, any recommended amendments to the Code of Official Conduct, as well as any accompanying regulations, intended to address the circumstances and instances, if any, for which a Member, Delegate, Resident Commissioner, officer, or employee of the House may be subject to discipline for the dissemination by electronic means, including by social media, of any image, video, or audio file that has been distorted or manipulated with the intent to mislead the public.”

Go to page 34 of House Rules. Did the manipulated video violate the House Rules?https://t.co/v7eyPYVUNo

(Related: Sen. Graham: Biden, Kamala, Pelosi “And Then Some” Will Be Called To Testify If Dems Call One Witness)