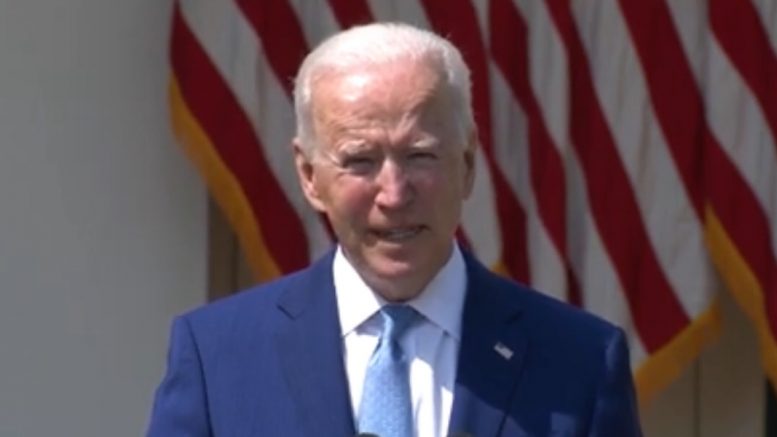 Joe Biden delivered remarks Thursday alongside VP Kamala Harris and AG Merrick Garland, announcing new executive actions on gun control and called on Congress to go even further at the White House, claiming gun violence in the U.S. is an “international embarrassment.”

Biden, however, alleged that none of the orders he put forward violated the Second Amendment. “Today we’re not just taking steps to confront the gun crisis, but what is actually a public health crisis. Nothing, nothing I’m about to recommend in any way impinges on the second amendment. They’re phony arguments– suggesting these are Second Amendment rights at stake what we’re talking about, ” he asserted.

“But no amendment to the Constitution is absolute. You can’t yell ‘fire in a crowded movie theater’ and call it freedom of speech. From the very beginning, you couldn’t own any weapon you wanted to own,” Biden claimed.

Biden’s orders will revamp federal policy surrounding so-called ghost-guns, which are self-assembled firearms. He also redesignated pistols with stabilizing braces to be classified as short-barreled rifles.

He said that his executive actions were not enough, however, and called on Congress to pass a suite of gun control bills. These include banning assault weapons, allowing gun manufacturers to be sued for crimes committed with their products, requiring background checks for purchases at gun shows, and reauthorizing Biden’s Violence Against Women Act, Daily Caller reported. Video Below

BIDEN: "Nothing I'm about to recommend in any way impinges on the second amendment… No amendment to the Constitution is absolute. You can't yell 'fire in a crowded movie theater' and call it freedom of speech. From the beginning, you couldn't own any weapon you wanted to own." pic.twitter.com/4dChTPgmQm

Biden’s comments quickly came under fire from some conservatives, who accused him both of lying about existing background check laws and emphasizing the wrong kind of gun violence, Daily Caller noted.

Biden also falsely said gun manufacturers are "the only outfit that's exempt from being sued." Biden wants to repeal the PLCAA which only prevents lawsuits based on the criminal misuse of their products by third parties. Gun makers can & are sued for other reasons.

BIDEN: "You go to a gun show, you can buy whatever you want–no background check." pic.twitter.com/TbvfDPEwlp

REPORTER: "Is it the president's belief that you do not have to undergo a background check when you are at a gun show?"@PressSec: "No it's not his belief. He believes that background checks should be universal." pic.twitter.com/CBXGhsI6Bk