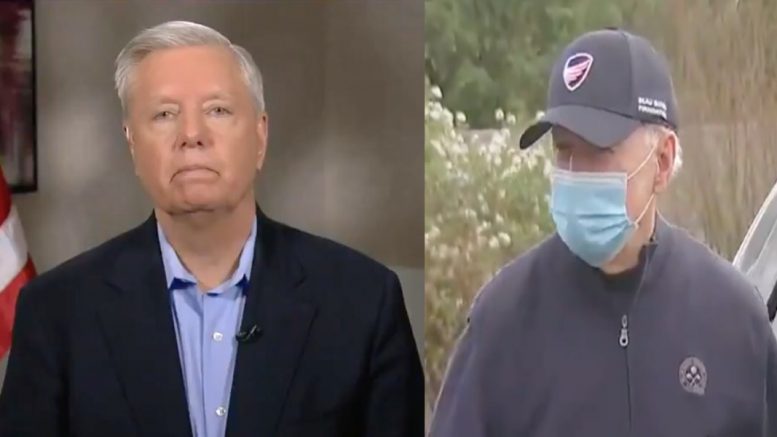 During a Saturday airing of Fox News’ “Justice with Judge Jeanine”, Senator Lindsey Graham (R-SC) reacted to Joe Biden’s handling of of the U.S. southern border and his decisions over foreign policy, namely Biden withdrawing the remaining 2,500 U.S. troops from Afghanistan by September 11, 2021.

Reacting to Biden admitting Saturday to reporters that there is in fact a crisis at the southern border, Senator Graham said, “It’s not a crisis, it’s chaos. I was down there just a few weeks ago. We had 172,000 people come into the country illegally in March alone. We’re on track to do 2 million.”

“The border patrol told the Biden administration during the transition, ‘If you reverse Trump policies, there will be a run on the border’. They were right,” Senator Graham said.

“I’ve never been more worried than I am now about the world at large. You got the Russians threatening to go into the Ukraine. You got the Chinese threatening Taiwan, the borders completely out of control, we’re gonna withdrawal completely from Afghanistan and make sure the Taliban takes care of Al Qaeda and ISIS. That’s insane,” he expressed.

“Joe Biden has created a lot of instability and in a very short period of time, and if he doesn’t change his policies on the border, the worst is yet to come,” Senator Graham predicted. “If he doesn’t get tougher with the Iranians, they’re gonna have a bomb before you know it.”

“I’m really worried about the world under the Biden administration. They’re clueless in my my view, in terms of the threats we face at the border and abroad,” he declared. Video Below

After months of lying to the American people Biden strolls off the golf course and admits that the situation at our southern border is a crisis. He still refuses to visit the border. pic.twitter.com/srCLnEeVzu

Asked why he is against removing troops in Afghanistan, Senator Graham replied, “They’re an insurance policy against another 9/11. The last time we ignored Afghanistan, we had 3,000 Americans killed. Afghanistan was a safe haven for Al Qaeda. They planned the attacks against our country there,” the South Carolina senator said.

“This is the 20th anniversary of 9/11. If we had 3 or 4,000 thousand folks on the ground over there, Al Qaeda and ISIS could never regenerate to attack the United States. I think what he’s done, Biden, is left us naked. We’re now depending on one group of terrorists to police another group of terrorists,” Senator Graham explained. Video Below

“I’m very worried that we’re gonna pay a heavy price for leaving Afghanistan like we did in Iraq and it’s gonna be worse. They’re gonna come roaring back, and we’re gonna have to go back in, and we’re putting our homeland at risk. If you don’t believe me, believe the military,” Senator Graham urged.

“He was advised not to do this in Iraq; he did it. He was advised not to do it in Afghanistan and he did it anyway. He was told by the Border Patrol, ‘Don’t change Trump policies, you’ll lose control over the border’. He constantly turns down sound advice to the detriment of our country, and I’m very worried about the state of the world under Joe Biden,” he added.

Joe Biden plans to withdraw the remaining 2,500 U.S. troops from Afghanistan by Sept. 11, 2021, 20 years to the day after the al Qaeda attacks that triggered America’s longest war, U.S. officials said on Tuesday.

Biden’s decision would miss a May 1 deadline for withdrawal agreed to with the Taliban by his predecessor Donald Trump. The insurgents had threatened to resume hostilities against foreign troops if that deadline was missed. But Biden would still be setting a near-term withdrawal date, potentially allaying Taliban concerns.