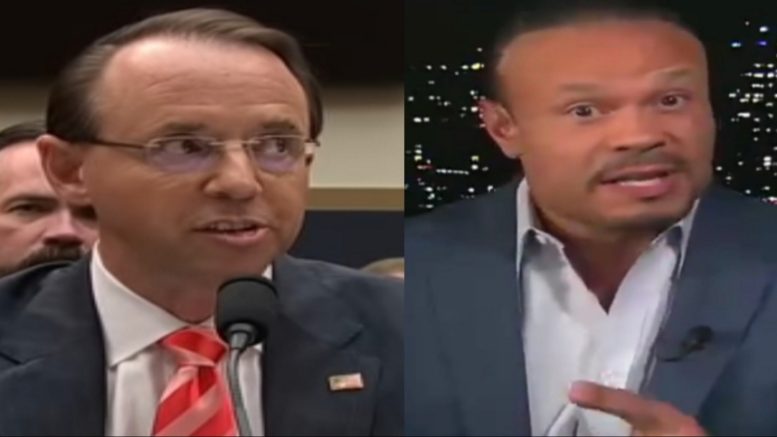 Dan Bongino was recently interviewed on Fox News. And like every other time he faces the camera, he delivered an explosive statement.

This time, he vented on the New York Times article revolving around McCabe’s memos on Rod Rosenstein.

Rosenstein is now implicated in McCabe’s alleged memos, as devising a plan to secretly record private conversations with President Trump.

According to the memos, Rosenstein thought he could persuade Attorney General Jeff Sessions and John Kelly to invoke the 25th Amendment and remove Trump from office.

Rosenstein has since refuted such claims and said he was being “sarcastic” when discussing such matters.

But now as this all hits the fan, former secret service agent Dan Bongino believes Rosenstein’s defense is pathetic and voiced what he thinks should happen next. Videos Below

Bongino is troubled by the latest revelations, despite Mark Levin and others warning this could be a trap by the left. Afterall, the NYT often publish stories that prove their hatred towards the President.

Bongino stated, “There are things you joke about and things you don’t, now you think this would be common sense when you’re the Deputy Attorney General of the United States.”

.@dbongino: “There are things you joke about and things you don’t, now you think this would be common sense when you’re the Deputy Attorney General of the United States.” pic.twitter.com/g1crE0bsTp

Bongino went further and said Rosenstein should immediately “has to be fired” even if he was being sarcastic. Take a look:

.@dbongino: “Rod Rosenstein at this point has got to go. He has to be fired.” pic.twitter.com/eSWcFGLqpJ

There are mixed opinions on what should ultimately happen with Rosenstein, but Bongino appears to have a clear solution.

Do you agree with Bongino that Rosenstein should be drained out of Trump’s Administration ASAP. Comment your answer below.