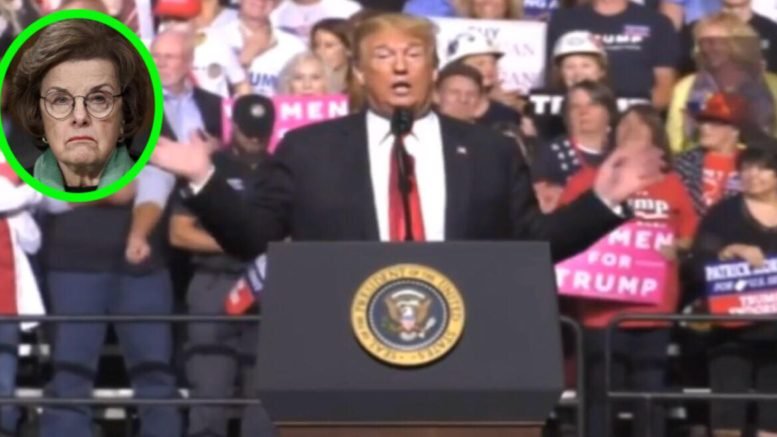 Saturday night in Wheeling, West Virginia, President Trump flew in and gave an explosive rally to a packed house.

The auditorium was full of excitement and full of MAGA energy. (Video Below)

After Kavanaugh’s hearing, suddenly allegations starting coming out toward him all because Feinstein chose to sit on an “alleged” letter for two months. It was planned and plotted.

Trump was speaking during the rally and brought up the Senate Judiciary committee hearing that took place before the vote for Kavanaugh.

Sen. Dianne Feinstein was directly asked before the vote if she leaked the “alleged” letter from Christine Ford. She stumbled on her answer, played dumb, and denied it. The letter was supposed to be confidential.  (Video Below)

During the rally, Trump called her out and mocked Sen. Feinstein for leaking the letter.

He told the audience, “Remember her answer!” Then, he proceeded to act out what she did after she was asked if she leaked it.

The crowd went wild as he reenacted Sen. Dianne Feinstein’s response and declared, “That was really bad body language! Maybe she didn’t. But, that was the worst body language that I’ve ever seen.” (Video Below)

Watch Below as President Trump calls out “Sneaky Dianne.”

Do you think Sen. Dianne Feinstein leaked the letter? Let us know what you think in the comments below.

(Related Article: In A Wild Twist Of Events, Feinstein Throws Ford Directly Under The Bus)